So, I'm 75 years old, dubious hip, and some balance issues. But I love riding old British thumpers. I've got a few friends now who just polish but don't ride. Not for me.
I've got an 1940 M20, and decided to do the ultimate heresy. I made a copy of the sidecar in the BSA museum. Steel frame, aluminium body. The best I could copy from 2 photos. Real Brit gerry can and spare tyre on the back. I mounted it on the chain side. That solved the falling over problem Still had the starting problem with my old legs. So, under the seat of the sidecar, I assembled, in series, a Toyota Hilux start motor, a 20:1 planetary reduction gear, and a ratchet for engine over-run. Then I got a standard 3 jaw shaft coupler and mounted one side to the end of the crankshaft. It's almost all hidden in the primary case.
With a subtle lever behind the seat, the starter assemble slides sideways from inside the sidecar and engages with its half of the three jaw coupler. I hit the button. Bob's you uncle. I then swing the shaft back. There's a 12v Alton alternator and a bigger 12v battery also under the sidecar seat to handle the Hilux starter.
But the starting RPM wasn't fast enough to get a good spark from the magneto and the new electronic replacement was no better. So I converted the old magneto to simply use the points to operate a coil/condenser which were mounted in the tool box. The light switch now has middle position being the ignition switch.
Looking at the bike, you can't see much difference. It's become a very friendly casual ride for me.
If there's a way to post photos on this site, I 'll do it. I think it could be a great way to keep old guys in their bikes a bit longer.

Ron Pier
Re: adapting a M20 for an old rider

You can use this site if you can work it out https://imgbb.com/ .... or email them to me if you want and I'll post them for you. Ron

Robb Nortier
Re: adapting a M20 for an old rider

I'll be there soon enough mate. I'm "only" 70, but have balance issues.
Both knees have been replaced. I build my own mags & etc.... so I get a nice
hot spark every time.

Thanks for the inspiration!

Ron Pier
Re: adapting a M20 for an old rider 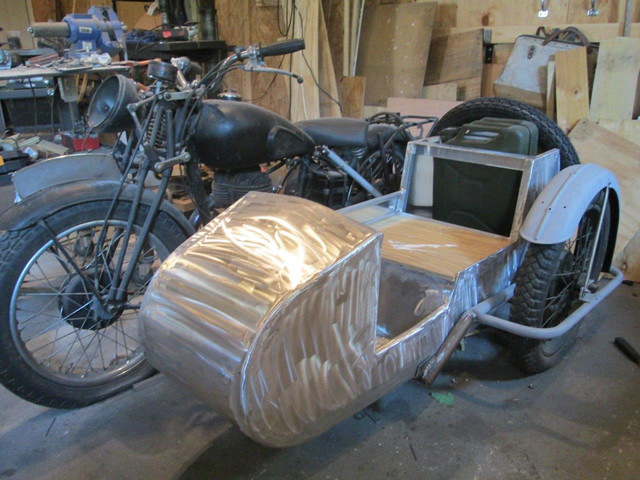 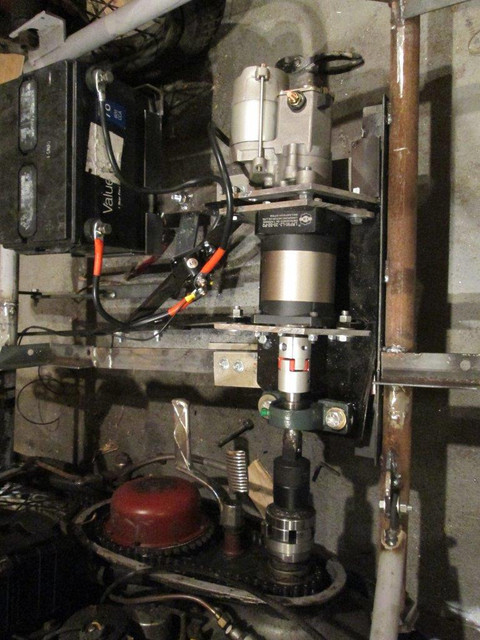 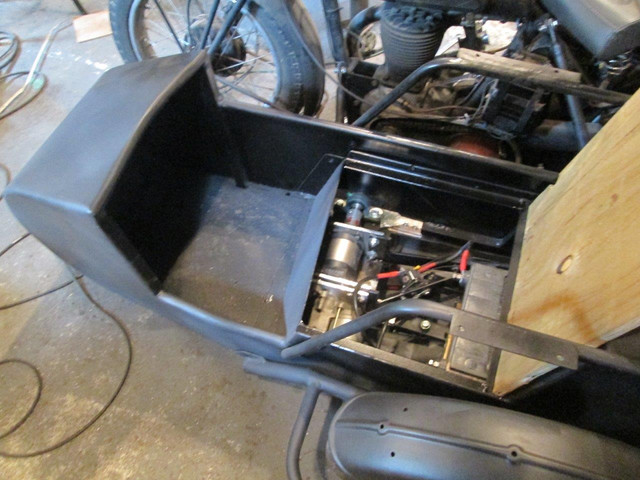 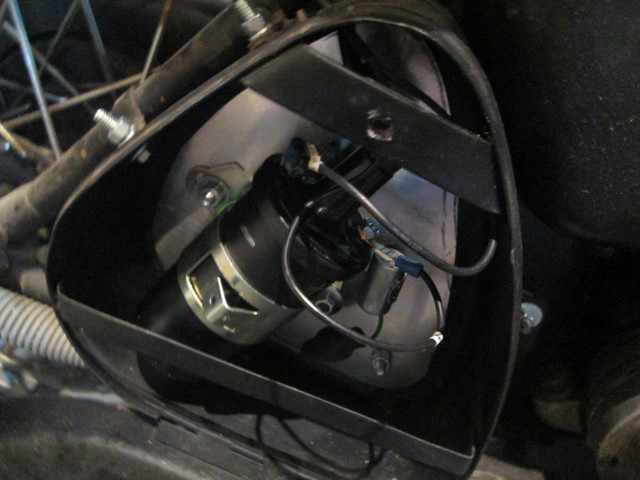 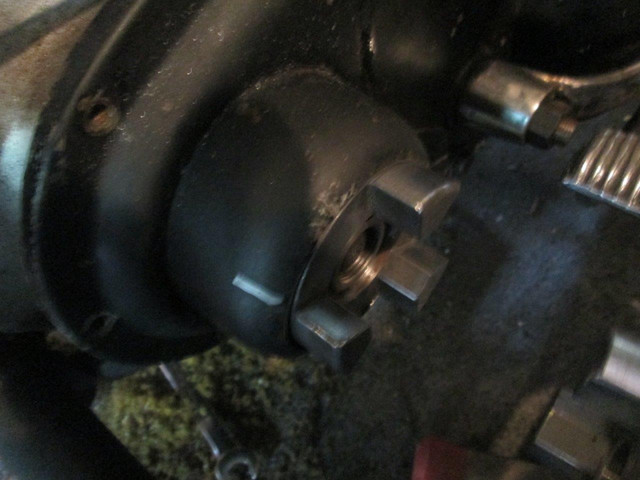 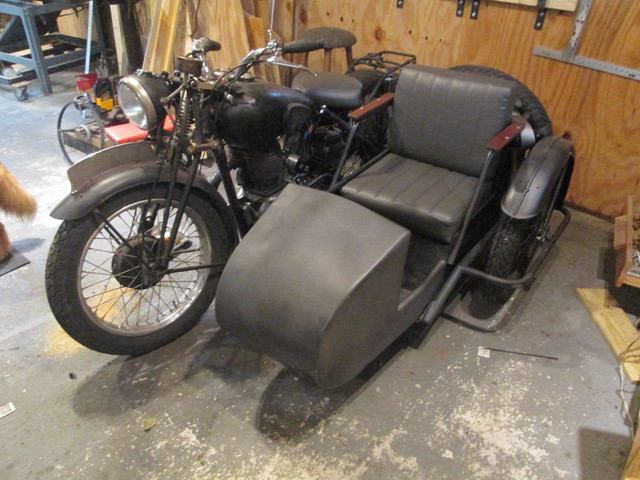 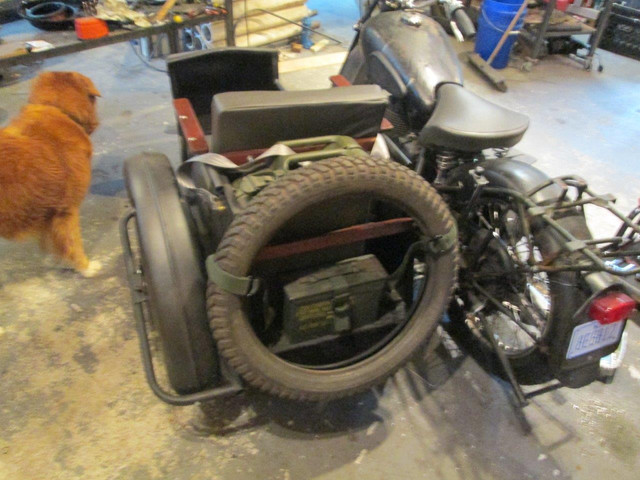 Ian Wright
Re: adapting a M20 for an old rider

Bob
Re: adapting a M20 for an old rider

I suppose the dog rides in the chair? Well done.

Charlie Haws
Re: adapting a M20 for an old rider

I am 74. Almost died from Covid last September. Still only have 68% lung capacity. My balance was off, but coming back. I ride almost everyday on one of my motorcycles.
For now I can still start my KM20. I had the left knee replaced a few years back, but the right is still holding up.
Man O man do I like your innovations. I sent my sons DNEPR back to him after I got it running, well most days anyway. Kicking that thing was a real pain.
However I really liked the sidecar and so did the dog.
Good luck with your bike and best wishes for many many more rides.

Ian Clare
Re: adapting a M20 for an old rider

Some time ago Ian Wright mentioned that it was possible to adapt swinging arm chain cases to an M20. With my right knee getting weaker, I am now in the final stages of fitting an electric start to my M33. Hopefully this will give me a few more years of use.

Robb Nortier
Re: adapting a M20 for an old rider

Nice to see you here Charlie. Glad you survived "The Hoax". Best wishes for you further recovery mate.

I'm almost finished with my transcontinental move. Let's hook up and sort parts!

Charlie Haws
Re: adapting a M20 for an old rider

Sent you an email. Are you moving back to the frozen upper Midwest?
I seem to remember that. With the lung issue comes Covid Brain. It is real. I had a memory like a steel trap, now more like a kitchen colander.

Baz Ford
Re: adapting a M20 for an old rider

At 82 I have gotten rid of my collection of 2 wheelers and ride a Can Am Spyder. Just negotiating to buy an M20 hoping I can stay upright on it !
Baz

Baz Ford
Re: adapting a M20 for an old rider

Well, got the M20, matching numbers, WM20 1940 ish, (forgot to write the numbers down!). About 1400 quid, picking it up next Monday. It is dismantled and promise of all parts to complete it at no extra cost.
When I work out how to add pics I will.