“Gratitude is not only the greatest of virtues, but the parent of all the others.”

I have just picked up on the posting by Keith re the contract W/ng numbers, I have XG20758 so appears to be about 200 after the end of this contract, however it is below the next mentioned contract records any views welcome chaps.
kind regards

It looks as if Chilwell received their first deliveries on 11/10/1941 and the last of their 1500 on 19/12/1941 so presumably the RAF allocation were from the RASC batch and were from the first 1500 frames....although it's not actually stated how the frame numbers were allocated.

thanks for your info guys, would any of this help me to get a [near enough] army number should I wish to put same on the tank?
kind regards

Richard I calculate it to be C4589683. But according to Rik's observations 422 of that first 1500 for the RAOC might have gone to the RAF, but I doubt anyone will ever know. Ron

These early Ariel contracts are difficult and any with RAOC / RASC splits are poorly documented. It looks to me as if the RAOC deliveries did not occur until after the RAF diversions....so my best guess is that they were from the RASC allocations and weren't sent to Ashchurch as originally ordered. The RAOC were something of sticklers for numbers matching serials...

By chance, an image of one appeared on Facebook today. 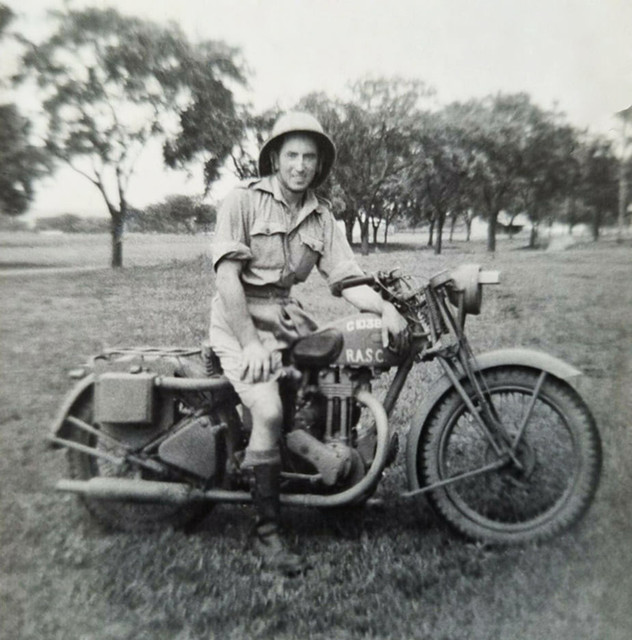 Oh yes ! thank you! now trying to digest it all :grinning:

Thanks Jan , that is really helpful. The photos too will be very useful in my restoration challenge. My late dad told me he thought the bike was a 1943 model he bought it in 1952 but I never saw it on the road.

Very much so , Thank you Jan

I am very grateful for your support. My delayed response is because I am currently travelling and have patchy access not a lack of gratitude.

The bike is in "baskets" at the moment and I m checking through the bits . The steel primary and inner case are not true With rippled edges, I'm not sure i can be correct them or if there is a specialist who could ?

I understand steel was only used for a couple of years 1943 44 ? . So I was wondering if it would be worth tracking down alloy versions for the rebuild. I think they have casting codes E9/731 and E9/600 ?

Just to expand a little on the Catalogue References, the system applied to all WD vehicle contracts and appears to have commenced in the early 1930s. It began at Cat. Ref 1 for each manufacturer and continued consecutively across all models and types. By the end of the war, the large suppliers were well past 300 but not in the case of motorcycles.

In addition to being noted in the master lists, it was shown, along with the contract number on the brass 'contract plate' affixed to the vehicle and stamped on all accompanying vehicle literature. The advantage presumably over simply using the unique contract number was that workshops and units only needed to keep a list relating to the manufacturers of the vehicles they dealt with and not the whole War Office inventory. Additionally, it provided a double-check that the contract number had been read correctly.

It allowed for the issue and use of the correct Spare Parts List, Driver's Handbook and Maintenance Manual. In practice, with the major War Office motorcycles, apart from the changes between Matchless G3 and G3L, it was more a case of evolution and the Spare Parts Lists rarely kept up anyway.

The rivet-counter's route involves a set of vehicle literature, early examples of which will bear the contract number, Cat. Ref and a number denoting the type of publication ( /1 for the Spare Parts List, /2 for the early Driver's Handbook).

There are actually only very small differences between these 1939 / 1940 Norton publications other than the covers and rubber stamps. After REME was brought into existence, the Driver's and Maintenance Manuals changed types and reference again. 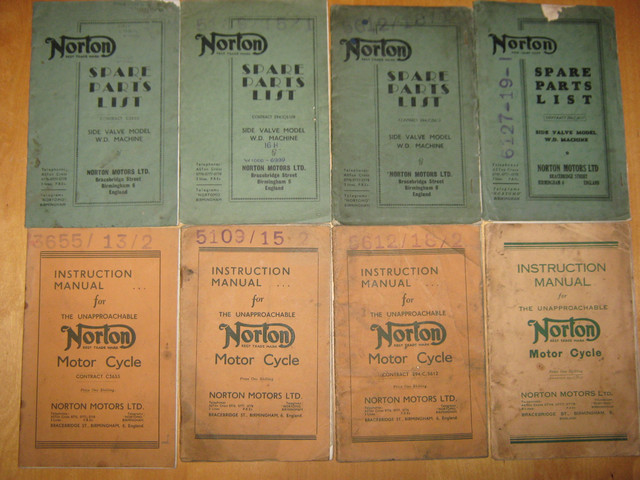 Jan,
Apologies I have only just seen your post. Many thanks to both you and Ron, the information was very helpful. My bike was on the Isle of Man. JT