The "BSA Motor Cycles Spare Parts 1939 Models" book has a useful page on fasteners, but its a little confusing especially when it comes to nuts, 1/4" for example has no less than 10 different ones, all presumably dimensionally different in some way, probably not all would be used on the WD M20 but it would be nice to know the differences. 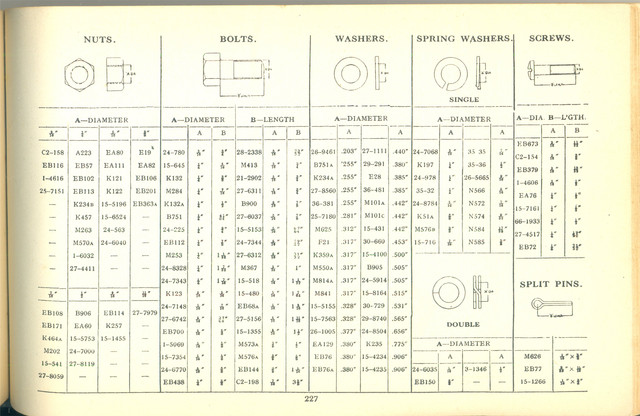 Rob some of the differences that I can think of for the nuts for instance, could be the thread ie Whit-BSF-BSC. Full nut- Half nut-Deep nut-reduced hex- anything to do with the bearing face or chamfered edge and the finish??

I think you would have to be especially dedicated to research and meet all the exact criteria today. Ron

That's a good point about the different threads, to a restorer here in the present that's probably the most important detail, but to BSA in 1939 it wasn't even mentioned, you just fit the correct nut by part number and you didn't need to know anything else, much like you would to a new vehicle today.

But its still a useful reference document and it may be worth going into detail on some of it.

Do these numbers appear in the Spare Parts List ? If so then it should be possible to agree on the characteristics of the most common at least.

Yes Rik, I can see hours of number crunching ahead.

I hate to admit to it, but I do produce CAD drawings for fasteners :(

Many originate to the origins of BSA EB M K are very early part numbers but do slightly change over time. Some of the screws for example had a slightly domed head, by the late 30’s they have square heads

The best resource for BSA fasteners is the table put out by Stainless Fasteners some time ago
The business went bust but the spreadsheet has been retained and is on various web forums & sites
Here is one link
http://www.stevenott.com/bsatrinbw.htm

One of the single model forums ( one of the Bantam ones from memory ) has the spread sheet as a spredasheet so if opened in a spread sheet app can be modified
This had the basic information fo SOME of the fasteners but as it is a spred sheet you can add a couple of other columms for finish, head shape etc .
You can also add missing fasteners as you come across them
Should be on every BSA owners computer
There is a similar one for Norton fsteners as well .

Just about every parts book BSA made has a list of "Standard Fasteners" usually tucked away on a page that originally was only 1/2 full , same as piston sizes, frame numbers and all sorts of little page filler gems.
Standard fasteners are CEI unless otherwise stated .
From memory Henk put 4 parts books on his CD .

Now as to why the funny heads

BSA had a hard & fast rule that no new part could be made if an existing part could be used to do the job
So when it came to fasteners , if there was an existing one , from a rifle, cannon, statonary engine, car or motorcycle that was the right length & strength then that had to be used .

The designer bitched about this endlessly in their memiours and even in the magazine atricles of the day under a pen name
This you get weird parts numbers with letters from before BSA made motorcycles appearing in M20/21 parts lists .

ORiginally BSA made all their own fasteners so again you get things like bolts with a longer or shorter thread than a standard bolt and each & every one of them gets it's unique part number as does the same bolt which is painted , Cd plated , Ni plated , Zn plated or polished so effectivly the same bolt with 5 different part numbers

Pre WWII BSA only used 2 thread forms CEI & BSW so there was no need to specify the thread form
If it wnet into alloy it was ( usually ) BSW
If it went into steel it was CEI
When BSA went to exploded views in their parts books they included a table of standard fasteners.
Three of them usually
Bolts , screws & nuts
The tables all specify "All threads CEI unless otherwise stated "
And because the part numbers carried on, a lot of the WM series fasteners will be in the latter M series parts book and of course the B & C series parts books as well.

The only one I find confusing is head bolts
I have barrels threaded BSW and also BSF so there must be some exceptions to the rule .

I will correct you as you very much incorrect.

A WM20 has parts that were first used in 1910, and then parts from flat tankers both OHV and SV , Round tank,Slopers ,Blue stars, empire star,J model,Model G Model E.

This I know for sure as I have most of these models and have studied nearly every part list from 1910-39.

Also pre 1936 many of the fasteners into alloy such a timing cover screws are actually 26 TPI cycle, magneto chain cover studs are also 26 TPI
Only 3/8” and above became WW
Crankcase breathers are 3/8” BSP

Ah this might explain why the manuals I've read, erroneously tell you to use a timing case screw to remove the oil pump spindle keeper.....When they are clearly different threads now. (26tpi in the keeper and whit for the timing cover screws) I guess someone forgot to upgrade the books?

Daren, I am well aware that there were other threads to be found on the bikes
But
The post was specifically about fasteners ,Nuts, bolts, screws & washers
Not pipes , spark plugs & bought in fittings .
AFAIK the oil pump was a bought in item as were the grips , Levers, Magnetos, speedos, light switches , lights both electric & gas & eventually carburettors All of which have a variety of different thread forms peculular to their makers but they are not the fasteners shown in the lists that Rob originally posted , wondering why there was no thread form specified for the fasteners .
The same external pumps , drip tubes & sight glasses are found on a lot of other bikes of the period so I would assume they were a bought in item as well.

So yes there are other threads on the bike but AFAIK not in the tables that Rob posted , although to be honest I did not check all of them

And yes the reply started out with the line that BSA designers were forced to use existing parts so I am well aware that an M20 has some parts common to every thing that BSA had ever made before the 1936 redesign & rationalization and did put the word ( USUALLY) in the line " If it wnet into alloy it was ( usually ) BSW "as I am aware that some were CEI but off the bat I could not recall which ones were CEI.
Thank you for clarifing that 3/8" was the change over size

The piles of rusting parts in my shed only go back as far as the model K ( about 1/3 of one to be accurate ) so not as far back as yours but I have pinched parts from a lot older bikes to keep the M20 , B2 , L & S running from time to time and bought a copy of David Braileys CD's the day he released them so I also have copies of all parts books back to 1910 on the computer plus a smattering of originals .

Sorry if what I wrote was confusing or missleading & thank you for the clarification.

BSA manufactured their own control levers on teens , 20’s and 30’s bikes.
K H H2 have a BSA made carby, admittedly the patent was bought from another company.
Oil line fittings are a BSA product and not brought in and in many instances screw directly in crankcases etc particularly in the 20’s early 30’s.
Sight bowls on late 20’s BSA are again a BSA product.
20’s BSA footboards have wood thread screws.

At no time did I mention spark plugs or magnetos, however I was referring to the parts that the connect to, that is heads, valve caps and timing covers particularly on flat tankers. Which are a BSA product.

You laid down a extremely simplified and incorrect explanation of the threads BSA used.

Anyway never mind all that, we will have to look at the wartime fasteners in a little more detail, obviously as the war went on others were added, sump guard shield nuts for example.