Before writing this, I did search and read many of the previous posts on this subject.

Having retired, I pulled my M20 out of the corner and am determined to get it going again. Its been run sporadically over the 20 years I have owned it, but not consistently enough. Fluids have been changed, the tank cleaned out, etc. New tires are here and it is running.

However, the (apply your favorite curse word) carb just will not stop leaking. The original carb on the bike was shot, so this was a new one 15 years or so ago. I took it apart, cleaned it carefully, and put it back together. It leaks gas from the top of the slot where the jet body inserts, just above the large cap on the bottom. Yes, I did put the correct gasket in.

From my reading, it was suggested that the float valve was leaking and/or the level of gas in the bowl was too high.

I lapped the float valve with Brasso as suggested in several places and cleaned everything carefully. No particular improvement using a plastic float in the lower position. I then took the original float bowl, lapped that valve carefully, and reassembled using a copper float in the proper position. It still leaks. Same spot. Neither float appears to be leaking.

It does not leak while running, at least static running. I have not ridden it much as I really don't want the neighbors observing that I am a literal flamer as I go past.

Any suggestions for things I have missed?

Alternately, is there a source for different carb that is properly configured? I see mention of a 626 with an extension to clear the timing cover, but not sure if that is easily obtainable.

All good advice is appreciated.

Joe firstly, that is a proper leak hole at the top of the union nut, to avoid excess fuel getting into the engine. You can easily check the float valve by turning the float chamber upside down and blow through the spout. no air should pass until you raise the needle off its seat with the tickler.

You could try fitting an extra fiber washer where the float chamber banjo meets the carb body to drop the level a fraction. Don't forget also, that once you have operated the tickler for start up, you have flooded the carb which will often leak until the bike is running and the float level returns to normal. 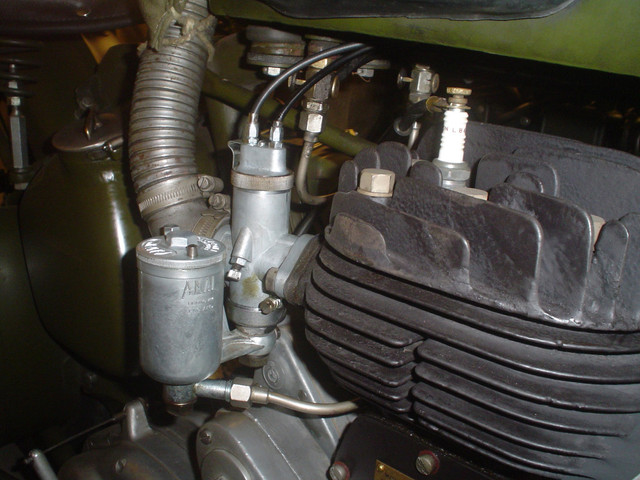 Thanks for the good advice Ron, which I have followed carefully.

Regrettably, I have not had complete success. Using a lapped needle, tested for leakage as Ron described, a copper float in the upper position, fresh sealing rings, an extra ring to lower the level a tad, etc.

What appears to be accomplished is there is no leak when the bike is running, or sitting upright on the center stand. If its on the side stand, it will leak.

I am considering putting the copper float in the lower position, but am concerned that the tickle rod will no longer reach. Not sure if a longer one is available, or if I could fabricate such a thing.

Any other ideas out there?

Maybe a dumb question but mine was having the same. Is the tread from de body and the union nut still perfect ?

Mine had a little crack on the thread, probably the previous owner did something wrong. As fuel is less dense than water it went trough the crack and leaked a lot from there.

Could be an Idea

Joe the brass float in the lower groove will not work. That groove is for the modern nylon float which has a lower clip. By nature of the design of the float bowl, they will not always seal properly on the side stand. As long as it works ok when upright is the best you can hope for. It's 80-90 year old technology. Ron

Thanks Ron, figured it was a geometry problem.

Rode the bike for about 25 miles yesterday without it bursting into flames or leaking along the way. Thats a positive sign, to my mind.

I turned off the petcock and allowed it to run a while before shutting it down to reduce the level in the float bowl. That seems to have worked as no leakage has been seen.

Guess I should be more accepting of cranky old stuff as I characterize myself as a cranky old guy.

Need to fix some other broken vehicles, than will circle back to the M20 to deal with things like its pissing out its gearbox oil after running and other minor annoyances.

It's the usual thing to run the float bowl dry when you park up. Especially since there's probably Ethanol involved.

If you rebuild your gearbox, a double lipped sealed bearing at the drive end will fix the leak. I always flip the inner seal out, some others leave it in. Ron

Guess its a case of an old dog (me) having to learn new tricks. Difficult sometimes.

I will be going through the gearbox at some point to ensure its properly shimmed. It does have false neutrals unless shifted carefully.

Any recommended source for the sealed bearing?

It's a metric bearing so readily available from any bearing supplier...I'd recommend you only use a 'branded' bearing from a known manufacturer...The number is 6207 2RS...The 2RS part denotes two rubber seals. Remove the one that faces inwards towards the gears before fitting...The seal can be easily prised out with a small screw driver or similar...Ian

Timken bearing located and ordered in preparation for the next adventure in mechanics.