I have observed in lot of Norton 16 h that the speedometer is placed in the middle with a different bracket and not in the usual left hand side with a bracket. Is it in earlier war models or something that was changes individually by owners.

The early bikes had the speedo in the middle. No doubt Rik will tell us the day it happened and whether it was before or after lunch!:relaxed:

Thanks for throwing light on this. Delighted to see more information on this.

Ron, you hurt me a little!

The day it happened will never be revealed! no 100% proof available.
Central mounted speedos' (P/N 3884)were applied from 1936 until replaced by the side mounted speedo's (P/N 4114) in late 1940 based on the spares lists. First C7353 machines were produced on October 24th 1940 but I have no picture of number 1 to proof it did have the side mounted version!
Pictorial evidence as far as I have agree with C7353 having side mounted speedo's. Previous contract C6653 shows to have central mounted speedo's on available pictures so in this case change of contract may indeed have been introduction of new part. (Contrary to the pannier toolboxes which were used on C6653 but not mentioned in that spares list!)

On Big4's the introduction seems to have been a bit later acc to spares list with C11297 (first delivery Sept 1941) I assume previous C7576 (first delivery jan 11th 1941) may well have used them already as I doubt they would have maintained 2 different parts at the same time but I have not checked pictorial evidence.

The improved version of 4114, 4114A was first mentioned in parts list for C14498 (late '43) but I assume introduced much earlier based on the very few original 4114's I have seen so far.
Unfortunately, spares lists are not the most reliable sources and introduction may have been earlier but the difference is not visual on pictures.

Note: speedo cable length for both versions is 25" so it seems the later one was deliberately positioned higher to prevent another change in spares stocks (at that time in combination with the Jeager pin drive).

Sorry Rob. I really should have known better. Ron

Ron, Looking at the despatch records and the arrivals at Chilwell, it would seem that the bikes left Bracebridge Street in the evenings...My suspicion is that lunch is likely to have been a Cheese and Onion sandwich with a Thermos of tea. :grinning:

It surprised me when I looked at this a while back, but the change seems to have occurred quite early and in fact occurred under contract C5612 while the BEF were still in France, although probably too early for any to have been delivered there...If evidence came to light that 2nd BEF had one or two with offset brackets though, I wouldn't dispute it.

Most of the photographic evidence that I have comes from use by the Corps of Military Police in Iceland. It is consistent that all machines up to and including C4153287 (W8119) had centrally-mounted instruments and that all bikes from C4153905 (W8737) have the off-set bracket. Delivery under C5612 commenced at W7000 on 4/3/1940 so this would put the changeover some time in mid-April 1940.

This is a nice clear image of a machine soon after the change..C4154277. It shows New Zealand troops in the UK during the second part of 1940. 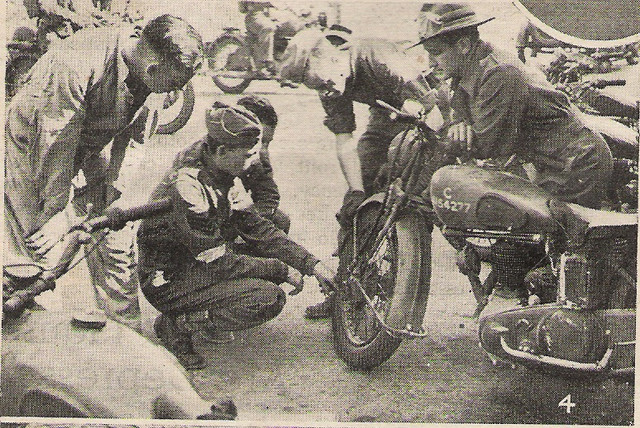 
I mixed some pictures and numbers silly enough. Should really not try to give answers out of my head.
It is not working properly anymore.
Started to organise my pictures now to make them more accesible.

Sorry for the confusion.
Rik to the rescue again!

Thank You Ron, Rik and Rob for your efforts and interest. Such an interesting and exquisite information.

Also the the bikes with speedometer in the middle had ribbed rear mudguards. Was that also a changed after 1940.

In my friends 16 h the speedometer was middle and his bike had a ribbed rear mudguard.

Interesting thing was his engine number : WD 84809 was looking different from the usual ones with starts with prefix W Or AS....

On my website www.wdnorton.nl you can find a range of chnages to the machines over the years. It is not complete and has mistakes to be corrected with hindsight but shows most of the changes.

Non ribbed rear mudguards are indeed a later addition but date of change not known, likely after 1941.

WD84809 appears a restamp the way you describe it and is far away from any early machine serial number.
To assure originality a picture of the number is needed, can be sent to wd16h@telfort.nl or added here.
Can you also send picture of frame number? with those much more can be said.

Thank you for time, effort and support for helping me.

Am attaching the images of the frame and engine number.

Muthu, in order to make your images visible in the thread, you need to use the HTML Full Image link. 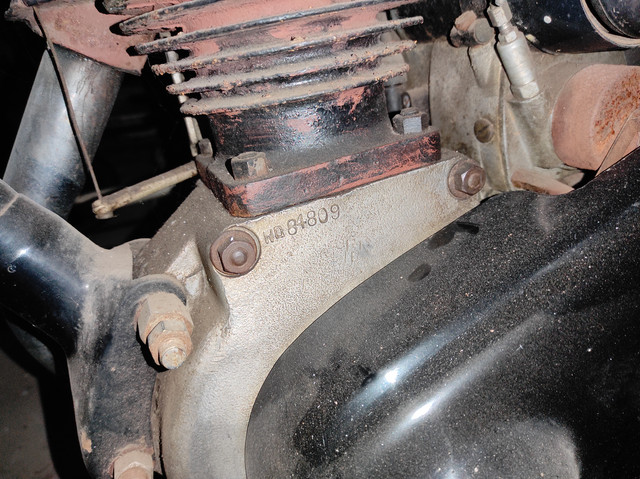 The frame number that you've shown is not a Norton stamping and looks to have been altered. I've certainly never seen a Norton factory stamp that extended beyond the lug onto the frame tube. The frame has both pillion footrest and field stand lugs so is broadly later than 1940.

The engine number was not applied in the factory either. Norton seem to have changed their casting practices around 1942 and this type of smooth but textured finish is normally seen on later engines. As far as I can tell, later spare engines left the factory with 79x100 bore x stroke markings but spare crankcases didn't. They are probably a replacement for the original W84809 but as well as the 'D', there are clues in the font such as the equal sizes of the loops in the figure '8'.

This is a number from around the same period. 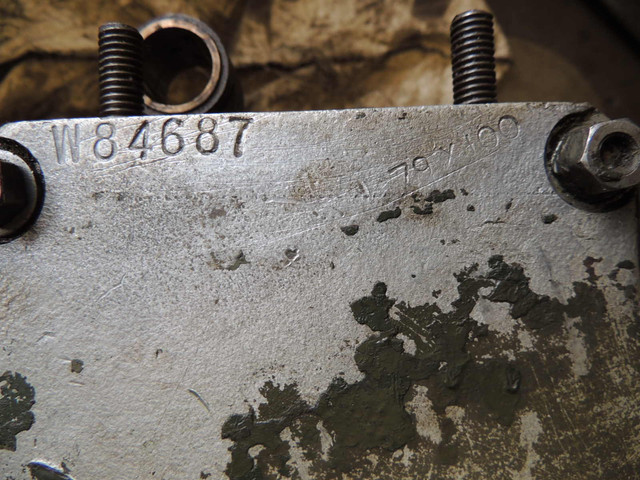 This is an engine built from New Old Stock crankcases. As you can see, the same textured finish and no 79x100 marking.