Got a Norton 16h RAF model spares book today off ebay, item no 284330142258, I've got a few other Norton 16h spares books if there is anything different to the other parts books will post on here, seller only shows six photos but says book is 22 pages which is more than the other illustrated parts books that I've got, it should arrive in the next week, if there is any differences will show on here if the two extra pages are not the blank ones at the back.

Is it the solo or the sidecar book, Steve ? I'm always interested in any contract / engine or frame number info...Not sure how I missed seeing that one !

It must be the solo model there's no mention of side cars on the the front cover or contents page, contract information might be on the next page but page is not shown on sellers photos,some of the parts books do have an ink stamp on the inside pages, but there could also be nothing inside to give an accurate date.

I can't make the eBay link work...I've seen this RAF parts list in the past. It seems to be a blue cover version of the generic early-war parts list and not contract-specific. Later lists were unillustrated but tended to quote engine and frame numbers.

There are still a lot of unknown gaps in the RAF contract engine and frame numbers. 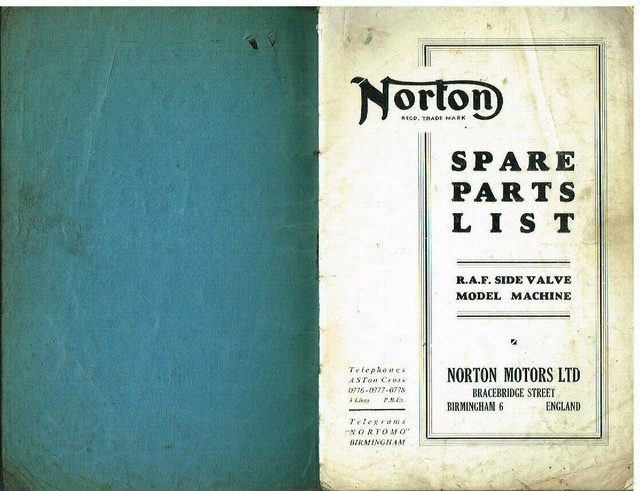 Maybe a dumb question,.. but why a separate parts book for RAF models ?

In short, because that was the Air Ministry. Although a very new service, they guarded their purchasing power and privileges jealously, until forced to accept more Ministry of Supply involvement.

It was standard in the contract terms that 'x' amount of literature be supplied and it seems to have been the habit where possible to reference contracts, however, there were plain replacements in existence too.

You might have noticed that NOS spare parts are often offered as RAF..This is because the RAF had their own numbering system and it was more prominent on the labelling that the War Office identification !

There are no frame or engine numbers in the RAF Norton spares book or any contract ink stamps,the only difference is on page 2 under note: PART No. 3605 K.S. CRANK RUBBER IS NOT FITTEDTO R.A.F. MODELS,the nearest other book to it is CONTRACT 294/C/5612 which has the same part numbers,prices & illustrations,the book probably dates from 1939/40. 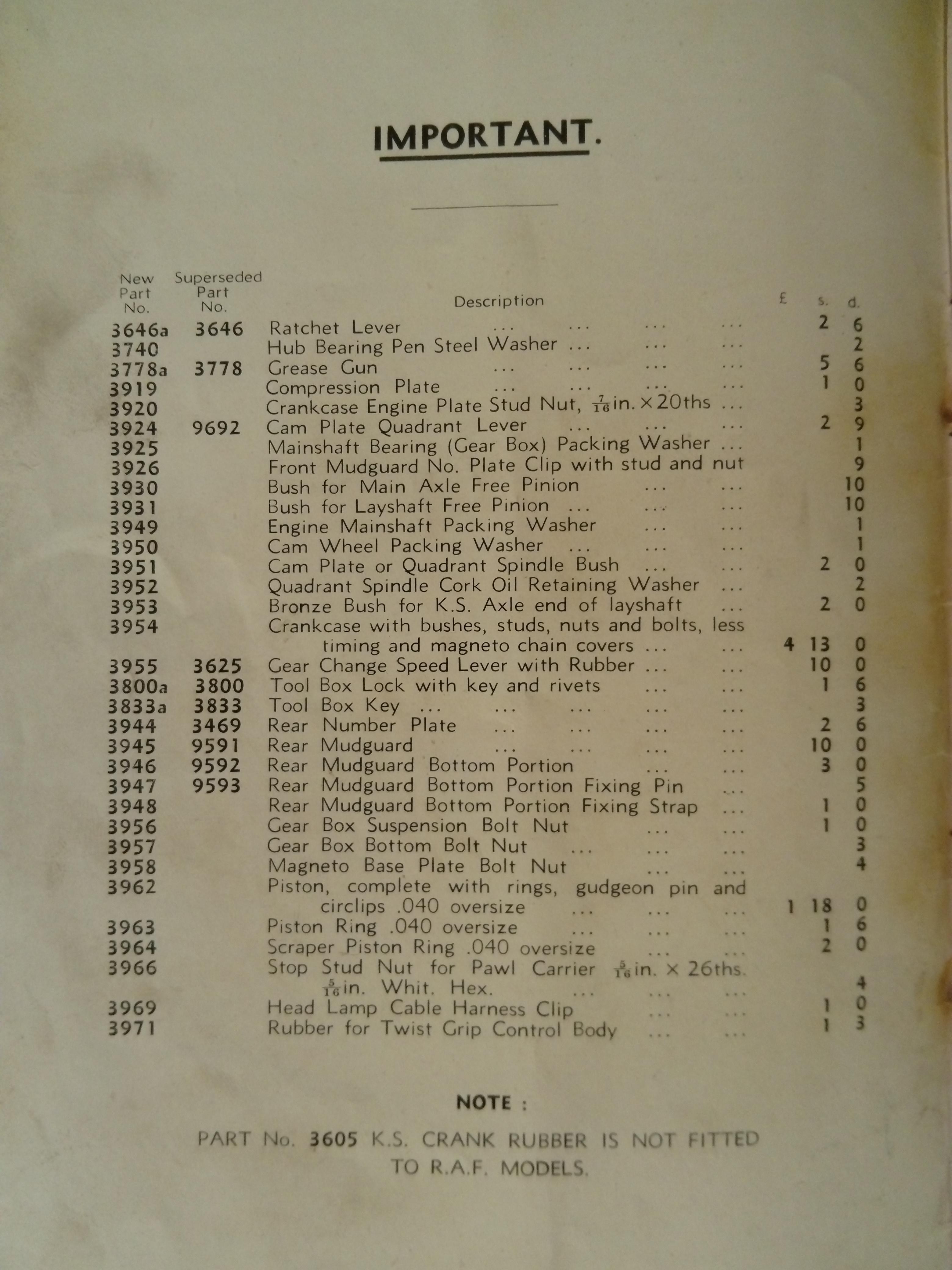 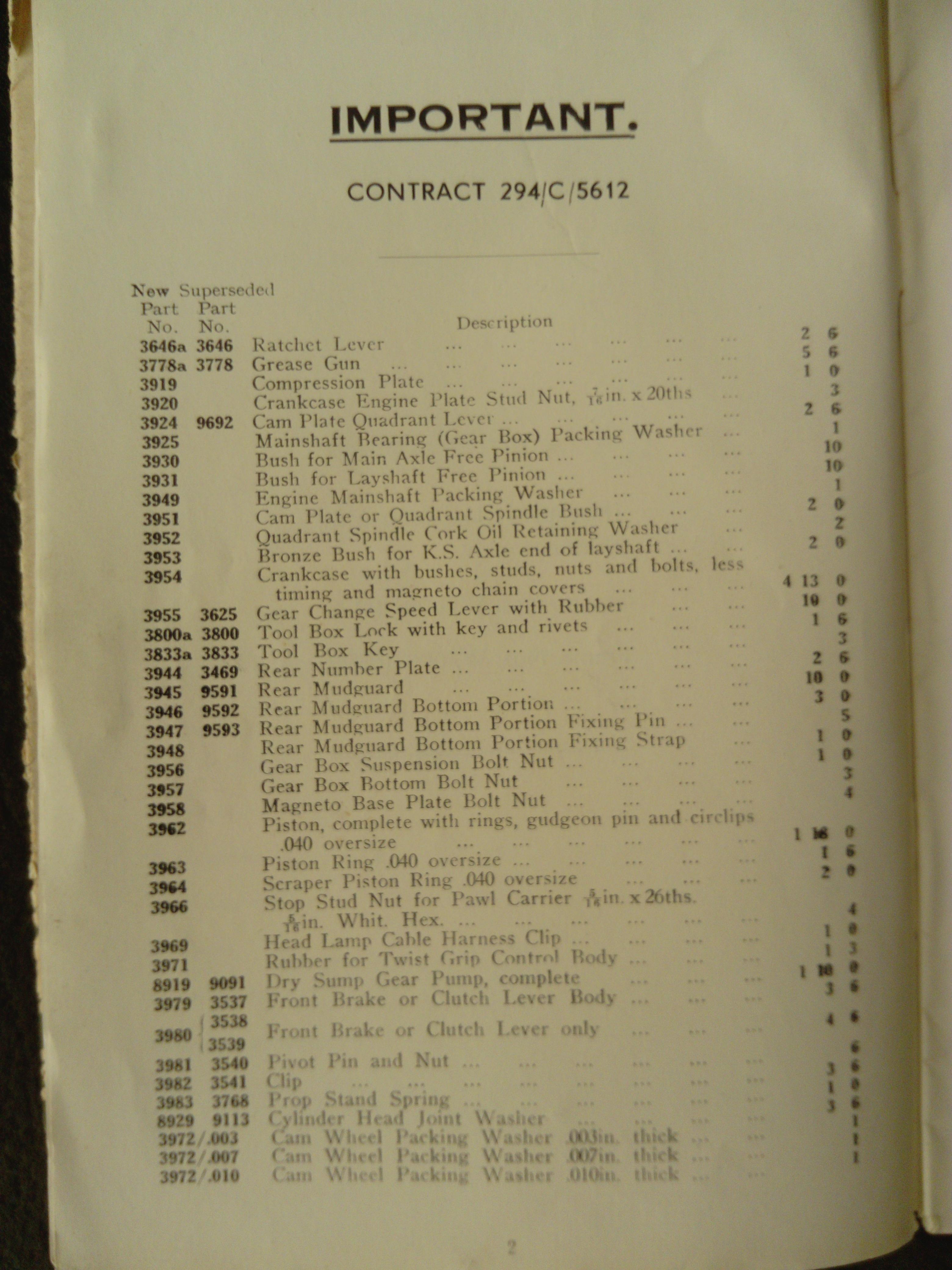