I am just reading the story of the BEF between 1939 and 1940 which records that the BEF lost 20,548 motorcycles (I assume that includes motorcycle combinations although it does not specifically say so). These losses include the period up to the evacuation at Dunkirk together with those lost in the subsequent part of the campaign which saw the remainder of France and the Low Countries over run.

I thought that might be of interest and although it is known that some captured vehicles were impressed into use with the Axis Forces is there any information regarding numbers or perhaps following the capture of damaged vehicles the Germans sought to repair /rebuild vehicles for their own use. Of course many vehicles were taken to the scrap yard and presumably the materials recovered for re-use but the opportunity to acquire more vehicles potentially very quickly may have been followed up.

I've seen a photo of a German medical unit completely equipped with British vehicles...There are numerous photos of German motorcyclists on British machines...The Germans used everything they could from any army/country they defeated...Ian

Likewise I've seen any amount of pictures of Germans with British vehicles, and even some made up from parts from various makes. Ron 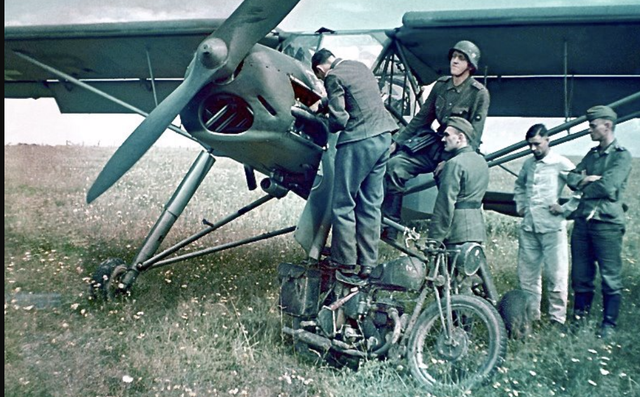 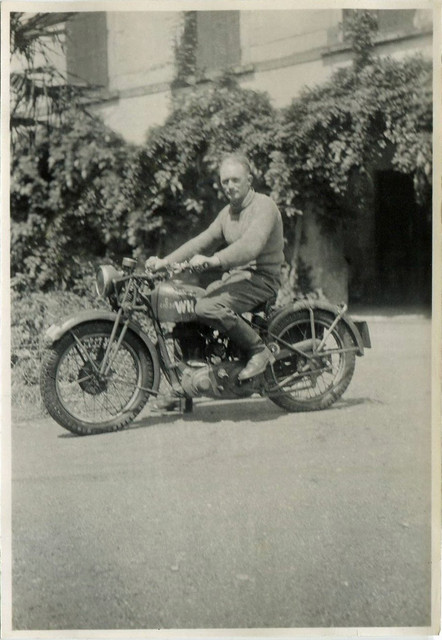 Ian's picture and Ron's second picture are both OHV's, arent they ?
What is is, M24 ?

The M20 has a broken kickstart return spring. The kicker is lashed onto the oil tank filler. Love it.

John you must mean the Triumph 3SW that those pesky Germans are using as a hop up! :smile: Ron

keith chandler
Re: BEF Motorcycle Losses
Nick
The bike in Ian’s photo is a M24
The bike in Ron’s photo is a B29 350ohv
The records I obtained from Chilwell regarding motorcycle contracts related to the Army indicate that there was only one Contract for Gold Stars being JM24s of which there were 3 machines. I have an IWM photo of one of them bearing the registration EOG 20 (IWM photograph KID 5613.
This is clearly in competition trim and I guess was for the Army Trials Team.

The Chilwell records do not include any Contracts for B.29s.

I wonder therefore if the machines shown in these photographs originated from dealers showrooms in Holland, Belgium or France and were just taken by the Germans rather than they were captured machines from the BEF put into Axis service. 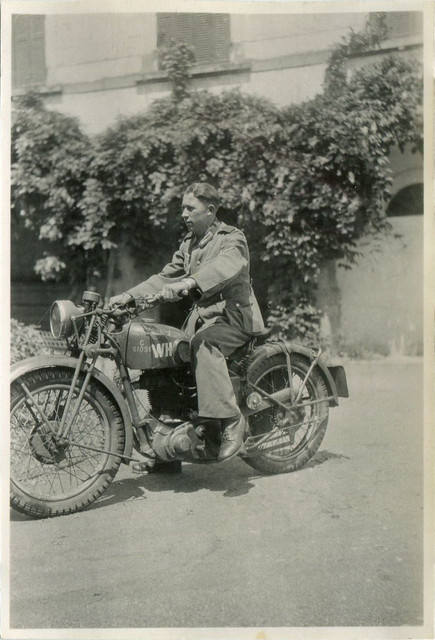 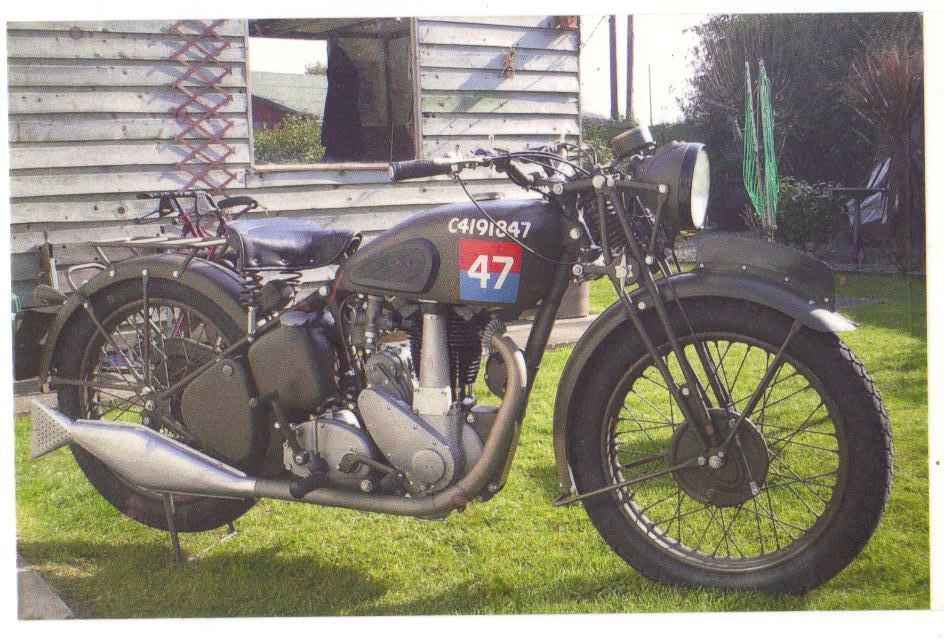 I tried to ID that bike ages ago, but Rob's clearer picture shows the knee grips from 1939 onward. In my picture you can see the end of the fish tail. The bike has none valanced guards and speedo through the brake plate. Not a B23 as that's a SV and not a B29 as the speedo drive is wrong. My money's on a 1939 B26. You can see the bottom of the frame on the twin port sports model?? Ron

Especially as they bombed the Triumph factory! Ron

This one was on ebay last week,it might be at Dunkirk,it looks like a BSA V twin but probably not a BEF bike as the side car is on the right hand side. 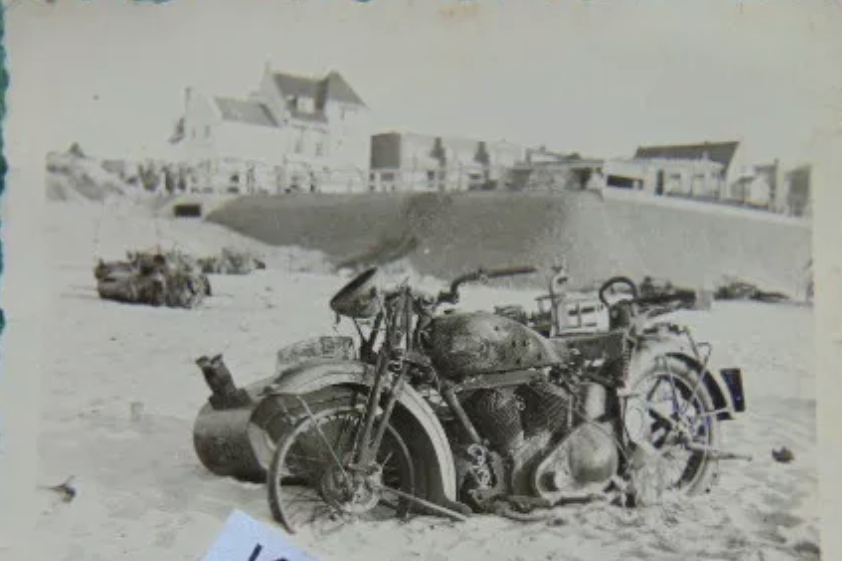 The bike on the photo below could have been used as spare parts by the Germans,or aided in the rebuild of another captured bike. 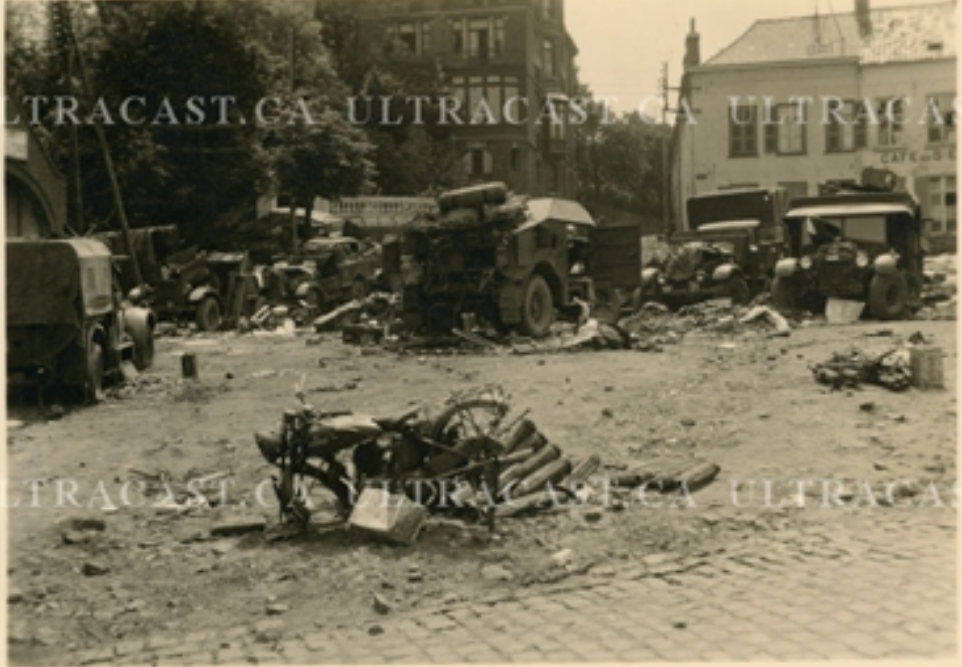 Royal Enfield below could also be ex BEF. 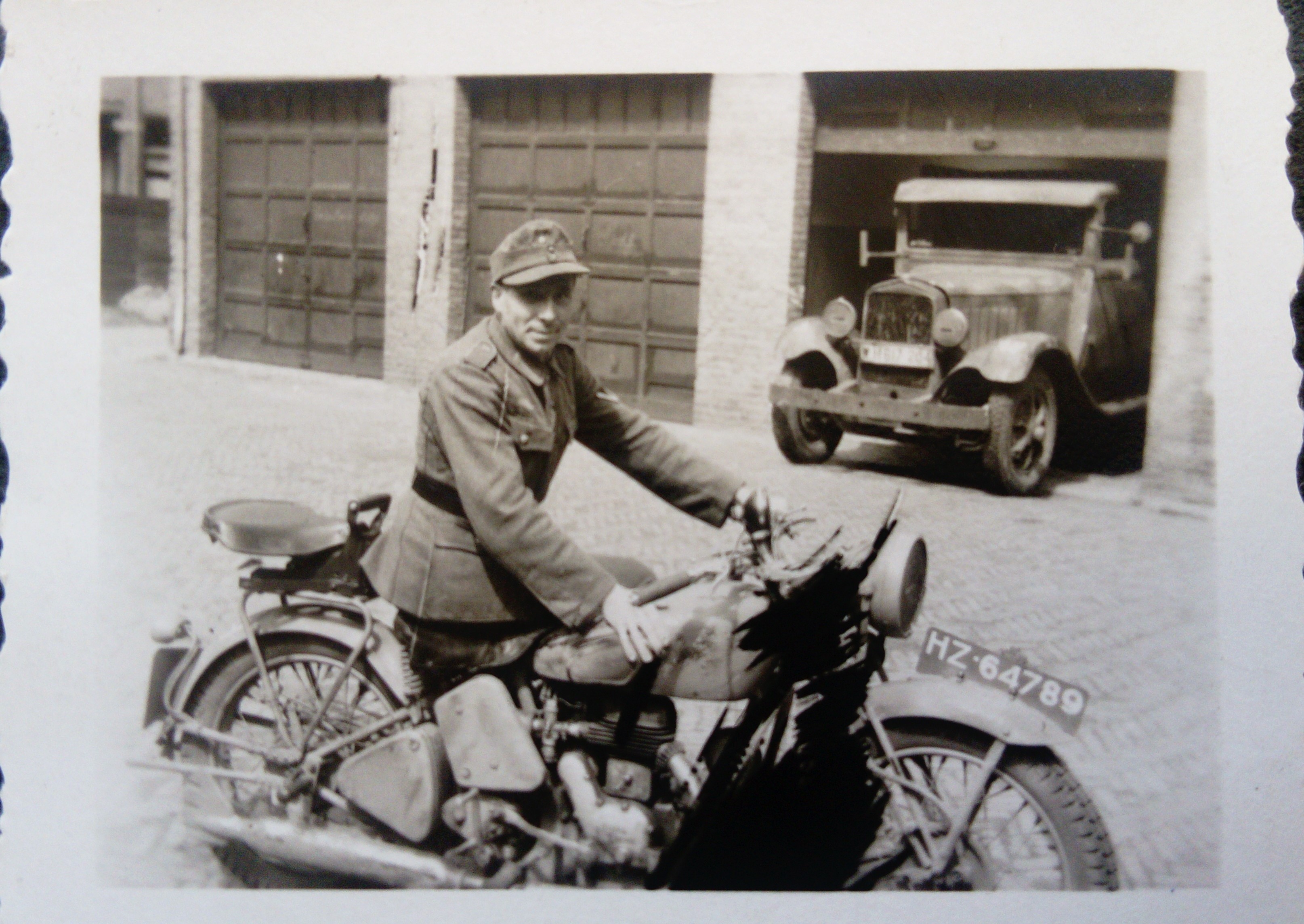 The BSA V twin is a Dutch Army G14, the photo is not taken at Dunkirk but at a Dutch beach!

The first picture (Dutch Army BSA G14) was taken at a beach close to Den Haag, in the Netherlands.

The second picture (remains of a BEF Norton) was taken in Cassel, France.

The Royal Enfield has a Dutch civilian registration number, so it is not a BEF bike...

The figure of 20,000 odd motorcycles first appeared in Ellis's official history of the campaign. It's not clear if it's based on the war establishment of units there or shipping records but the latter are incomplete, only commencing in November 1939...They do though show that even as late as mid-May 1940, up to 500 motorcycles per day were still being sent to France to plug the increasing losses.

There can't have been that many sidecar outfits. Only the SWD Big 4 was operational with the army. The RAF may have had some 16H passenger outfits there. 4th Royal Northumberland Fusliers were the only fully equipped motorcycle battalion and they had 99, The Hopkinson Mission had less than a dozen, brought over with their riders from Queen Victoria's Rifles and it seems that each of the Divisonal Cavalry regiments had two or three with perhaps a spare...and presumably some in the Ordnance depots. Certainly less than 150 in total.

German use can be split between early ad-hoc usage and full acceptance into the system which only seems to have occured with BSA and Norton. There are late 1940 images showing that army (WH), Luftwaffe (WL) and navy (WM)units took over whatever they found and painted their own symbols on. Most of the Heer and Luftwaffe units that were in France in 1940 found that they had earned themselves a holiday in the East. Some vehicles were left behind for the units that replaced them but many went to the Russian front with new Wehrmacht number plates. The Navy being more static seem to have kept quite a lot of captured material in use on the channel coast. 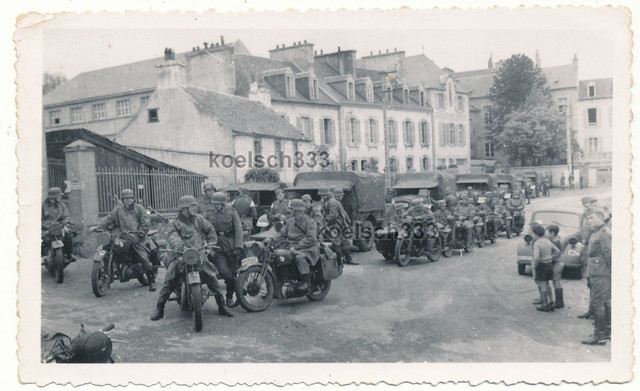 I can add a little to the discussion about the 3 M24’s purchased by MEE with the registrations numbers EOG. These were the 3 army bikes used for the 1939 ISDT in Salzburg, Germany in late August 1939. My recollection is that at the end of the 5th day of the event they were told that the declaration of war was imminent and made a dash to the Swiss border and escaped over it just a few hours before it closed for the next 5 years. I am sure Rib Miller will be able to provide more details on the bikes. JT

keith chandler
Re: BEF Motorcycle Losses
John Tinley
I can add a little to the discussion about the 3 M24’s purchased by MEE with the registrations numbers EOG. These were the 3 army bikes used for the 1939 ISDT in Salzburg, Germany in late August 1939. My recollection is that at the end of the 5th day of the event they were told that the declaration of war was imminent and made a dash to the Swiss border and escaped over it just a few hours before it closed for the next 5 years. I am sure Rib Miller will be able to provide more details on the bikes. JT
Interesting JT that the three M.24s having EOG registrations were used in the 1939 ISDT as they appear to be 1938 models going by the oil tank fixing.

BSA have them listed as despatched in July but then 'sold' in August. Wasn't there a suggestion that they were modified at the works ? The BSA records show them as 'Inter Nat. Six Day (Army)'

The RTR and the Army had 38 and 39 models between them..The picture below shows the RTR team on the 38 bikes with the registration numbers mentioned...The second photo shows ISDT riders at the docks in 1939...Note the 'civvy' M24s...One of these bikes is in the original photos I have of the team in Austria...I'll try to dig out and copy the originals....Ian

23x M24 was also delivered to the War Office in September 1939, according to the BSA factory ledgers. I have found these about 1 year ago and informed O&M, for the next version of their book.

Interestingly 1 of the original M24 War Office engines surfaced about 6 months ago and is now in the hands of a Dutch MC collector. 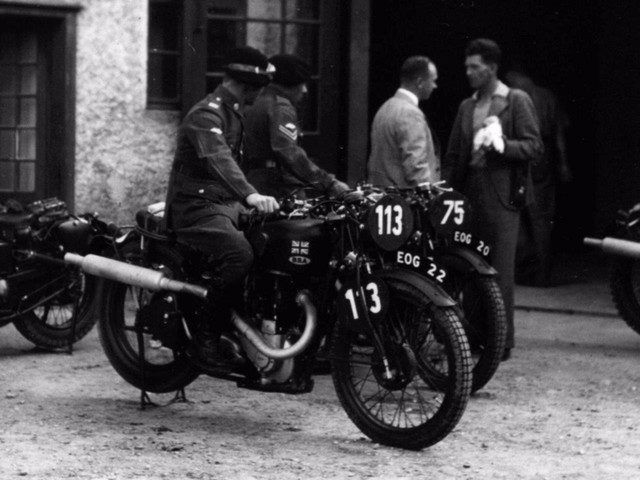 Those bikes may be 1938 registered as stated in the previous photo but they are 1939 bikes with the '4 screw' tappet cover..of course they could have been registered from August to December 1938 and still be to 1939 specification as the 1939 BSA model year started in August 1938....Ian