I found a large quantity some years ago, mine are nos. I will make a few photo's and post them here. I know Leon has them as well.

Hi
any news or update on these
Br
Jo'B

I'd like to know the answer to this as well...I'm about to make some for my own bike and would like to get them right..
Every Lucas headlamp bolt I've ever handled has had the domed head pattern and most were made from brass in the late 40's/50's period...However, it's entirely possible wartime ones were different...Ian

Ah...I've got my wires crossed there then...You are talking about the bolts that hold the brackets to the forks...I've always thought they were a flat head type...Ian

Inquiring minds want to know... Not that I am anywhere close to that kinda detail on my project yet.

if we are talking about the bolts that attach the headlamp stays to the forks then these bolts are 5/16 BSC bolts with a reduced hex. The heads are flat indeed. Early bolts were cad plated, later examples are blackened. I have both type NOS. The were fitted with a normal size nut and the thread is just long enough for the nuts to fit. The 4th bolt is the one that fits on the damper set up and is slightly longer.

I really dislike reduced flat bolts...It means I have to remanufacture them rather than just fit stock items to meet my drive for 100% bead blasted stainless fasteners....Also, nuts (or bolts) without washers against paintwork?... What were they thinking?.. Personally, I can't handle that and feel compelled to make suitable alterations....

Dave Middleton has 5/16" reduced hex bolts/sets in differing lengths. They may have domed heads so still some easy machining?

Thanks Ron..Worth knowing for future reference...Unfortunately, I've just finished making the bolts under discussion!!...Now I have to do four reduced diameter washers to go under the heads...:laughing: ....Ian

A technical reason for the reduced heads could be that is can now be reached with a [ring]-spanner......with use of a bigger head a ringspanner will be blocked by the forklinks.

With no washer fitted under the head, the idea could be that the bolt is kept steady with a ringspanner and only the nut is meant to be turned.

At least that is what I do as the low bolthead will quickly slip a spanner off.:relaxed: 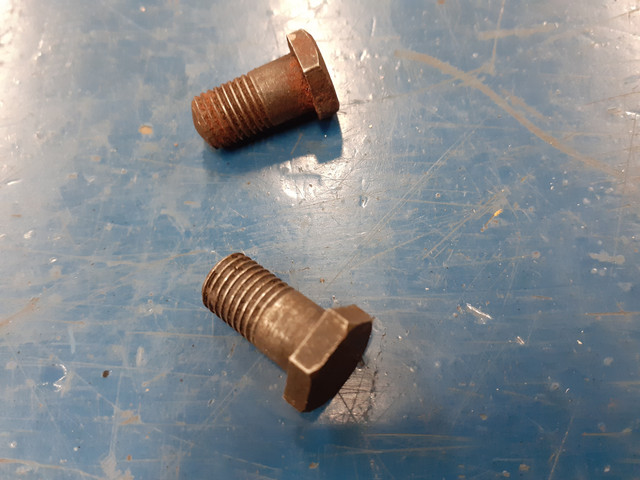 Don't think so, John.....similar as the headlight-stay-bolts, also lots of [prewar] BSA framebolts originally don't have a washer under there low and domed head, only under the nut.

So the idea seems to turn only the nut.....the lack of a washer under the bolthead will probably help to prevent the bolt from turning when the nut is fastened.

With some luck you only need one spanner! :relaxed:

Were the lamp bracket bolts not painted as an assembly with the forks on the WD M20s or is it simply that they are blacked and it looks similar ?

Slightly off topic but I've read recently, on the JAP engine forum I think, that Alf Hagon did not use any washers at all on the speedway and grasstrack bikes he sold. The reason? To save weight!.

'Rustproof' is a subjective term in that application...'Temporarily rustproof' would be a more accurate description..This finish was used for no other reason than the fact it was cheap..A decision has to be made these days on whether to go for historical accuracy or durability....I admire the achievement of complete accuracy within the obvious limits of what is possible these days..It's actually more difficult than taking the 'non standard' route...

Personally, I don't like the idea of having to revisit the same work over relatively short periods of time to avoid obvious deterioration...To that end stainless steel and plated finishes (cadmium or dull chrome) are all preferable to a blacked finish IMO...Ditto fitting washers where they weren't used originally to protect paintwork and the underlying metal...
Not a popular view on here I know...Perhaps blacking stainless steel would be an option..?...Ian

I expect it was rust proof enough to last a portion of a war lasting 6 years, its a different matter now where we restore a bike and hope it will not need redoing 20 years later.

Its a little like saying the M20s week point in the rear stand pivots which always seem to fail after 75 years.

['I expect it was rust proof enough to last a portion of a war lasting 6 years, its a different matter now where we restore a bike and hope it will not need redoing 20 years later...']

Very true and the point I was making really...My requirements are quite different to those of the original users....I also don't have an unlimited supply of spares and replacements...The main reason I took my M20 apart last time was corrosion, of the mudguards in particular, that would have been terminal if I hadn't addressed the situation...

The army had my M20 for 27 years..I've had it for 40 years..Out of necessity I've had to rebuild it more than once in that time, partly due to high levels of use and some abuse as well, so I like it to last....Ian

Some months ago I was asked to chemically black some bolts I made for a V twin BSA. From passed experience personally and as a defence contractor, neither chemical or oil blackening lasts very well. So I spoke to one of my plating subcontractors and he said they now did zinc plating with a black passivation. So I had the bolts finished in this. It looked ok.

I hope he never goes out on a salty road...(he probably won't)...Ian

Hi
Can stainless steel be blackened or darkened by gun blueing process ?

There are a few products designed for blackening stainless steel...A Google search quickly turns up some options....Ian

My plater told me that SS can be chromed or cad plated, so I see no reason why not black passivated zinc. Ron

I tried some gun black on a freshly blasted stainless part and it had no effect at all...So a chemical/process for the specific job will be required I imagine...Ian

Regarding the early bikes: The 1940 military partslist on Henks DVD quotes:

And that matches what I have found on my early projects..

Quite a few nuts and bolts on these early bikes where painted....I have not studied it in detail but think that bolts and nuts which are not likely to be used in normal service are painted, like these headlamp bracket bolts/nuts, certain mudguard bolts etc.

And those who are more likely to be used, like the detachable rearmudguard, frontmudguard stand, the steering clamp bolts etc. where cadmium plated.

It's quite funny that this is being discussed I'm in the progress of putting my front light brackets on now, I know some are more rivet counters then others and dont want to spoil a good post with a diffrant slant.

My Grandad was a dispatch rider in the BEF ,Africa and Dday onwards, when I turned up on my m20 years ago before he passed, he pointed out that the 1st thing that a Donr did was go to the stores and get a pot of paint and paint the shiny bits especial bolts ,nuts and even the levers etc. He said some guys painted the engines also but if a inspection was going to happen you would have to scrape the paint off , nuts and bolts and other bits didn't matter. Having items painted in Africa was a must as something could catch the sun and be seen from miles away , you also had a standing order not to go to fast as it stirred up dust.

So essentially home front yes you could keep factor standard , everything else then think and use common sense .

At the end of the war my grandad got shot a total of 7 times and his ukulele got some extra holes in it along with his bikes and him .

Another parts list I use is the following as it has illustrations which is unusual for wartime lists - at least in my experience
Lamp brackets, securing bolts and nuts are now located in the Fork section
15-8994 x 3 - no finish indicated
15-8992 x 1 - no finish stated - bolt re-introduced
EA80 x 4 - no finish stated - 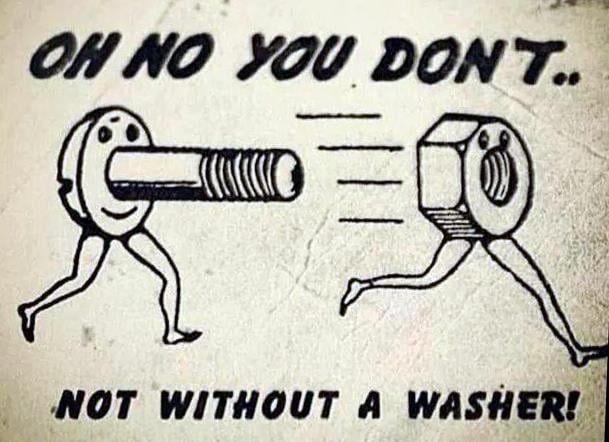