Hi all does anyone have any information on m20s that served in ireland being ordered or retro fitted with km type rear valanced mudguards .
I have seen various wm20s all being about 1941 that have either served or come through long kesh with early rear guards and all have the same reme rebuild plate

If you are referring to Southern Ireland?

However the BSA ledgers are very unreliable, many of these machines could have been diverted to the British War Office.

But if the machines you have seen had a REME rebuild plate they can't have gone directly to Ireland from BSA so its possible that the War Office were making up Dublin's lost orders from rebuilt machines when the British needs had been met?

What dates were on the rebuild plates?

If you are talking about Northern Ireland then they are just random rebuilt BSAs from the British Army?

As rob pointed out a considerable number of early bikes went to the IDF in Dublin - after their disposal, many migrated north as they entered the “civilian” market - cheap & cheerful

The post war key cards usually show the last unit or depot where the bike or vehicle was based or stored, I did start a spread sheet which showed these locations and a quick search shows I found 157 BSA M20s so far at Long Kesh but not necessarily at the same time. 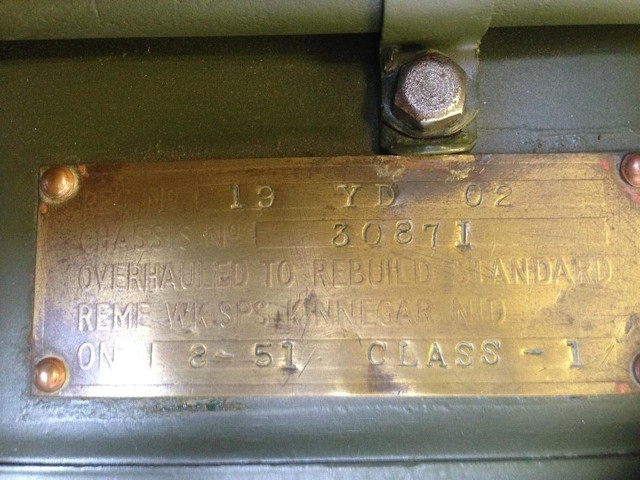 By 1966, most of these machines had become Cold War reserve stock and it would simply have been in store at the Command Vehicle Park at Long Kesh.

Unfortunately, the system used on the record cards seems to have been one of pencil and eraser so only the last entry is generally visible. It's clear that the bike was already within the Northern Ireland Command by 1951 when it went through the Command Workshops at Kinnegar. Apart from that, it's all guesswork...Whether it spent the war in Northern Ireland, travelled there with a unit being posted or was simply transferred from a UK depot is impossible to say.

It does sound though as if Kinnegar had a large stock of deLuxe mudguards !

The key card for this one reads

Its interesting that it still had its factory serial "C" number and never received a rebuild serial, apart from that there isn't much more to learn from this?

I'm not sure actually that all workshops in all areas used the parts bin 'Rebuild / New Serial' system....It seems quite likely, considering how many have survived with matching numbers that in some locations, machines were reconditioned / repaired and then returned to units.

Hi, I live in N.Ireland and have seen multiple bikes around 1940 to 41 that have the rear valenced mudguard. I've seen it too many times to think it is just a coincidence. All the best Glenn