Hello all, below a few pictures from the family album, perhaps already known to some of you. they are also to be found on my website (see my email address) under 'van Ginneke on Wheels'. But perhaps the website does not function on your pc or mac as it is 'written' in a already antique format....


I have a few more about the PIB ,I will upload those later.

Wrottesley Park 'Royal Dutch Brigade' later to become known as the 'Prinses Irene Brigade', Brigadetrain.(maybe it was already PIB at time of picture) Seventh from left is Jan van Ginneke 1917-1995. He was in May'40 Despatch rider with the Staff 2e Comp. 30 R.J. in Neerkant, the Peel division. After the 14th of may he traveled with a group through Belgium and France. On the 21th (edit: it was the 18th) of June he managed to escape on one of the last (or maybe THE last) boat from Nantes to England. On the way out from Nantes harbor the boat got strafed by a German plane but no real damage or casualties. They arrived on 26th of June in Porthcawl.

Jan van Ginneke pushing a M20 (or 21?) from the PIB through a stream 'somewhere in England'

L.P.J. van Liere and mr. Krommendijk on BSA '118' PIB Brigadetrein. van Liere wrote the book Dutch Courage (1985 it has no ISBN) about his life between 1939 and the return to the Netherlands with the PIB. you can find it sometimes on the net, written in Dutch.

A page from his notebook that he carried with him during his escape to England.
-in Dutch ofcourse and apart from that pretty difficult to read-
I got the date wrong in my first post, he left Nantes on the 18th of June not the 21st.
First page he writes that France has put down the arms and the Germans have neared Nantes to 17km.
They dumped 250 tons of linseed in the harbor to raise the ship as the tide was low and the ship could not leave the harbor.
The departure from Nantes harbor and passing the torpedoed Lancastria that was sunk on the 17th of june taking most of it's crew with her. Also mentions the attack by the German plane, his rather dry comment: 'gelukkig alles mis' (luckely all missed)

Hello Vincent, thank you very much for sharing your images here, is there any chance they could be scanned at a better resolution so we could read the tank serials?

Jan van Ginneke on a BMW R51 or R66 at Wrottesly Park. Tank decal possibly says 118 as the '8' was written a bit 'flat' . But it can also be 111 or 112. Any clues anyone? Possibly a Dutch army BMW that was taken to England during the escape of Dutch troups in May '40. As a note besides, A workshop technician that I have known at the Gerrit Rietveld Academy in the early 80is was Mr. Weijnands. Pre war he used to be a 'test rider' taking the then new Dutch army BMW's on a high speed round trip around the Ijsselmeer to 'run them in'. Upon return he took the next BMW to test. nice job!

Jan having fun on that BMW.

sliding to a halt, a pity the pictures are vague. It would be interesting to know the markings on the staff car.

My father, Gerard van Ginneke on a Matchless G3L in 1944. PIB. near Bergen op Zoom, the Netherlands .
(note the wooden shoes)

Hello Rob, the pictures are pretty much all I can do.
I hand photographed the originals in the late eighties, so I am the blame...
I glued the originals in a small album that my uncle Jan used to take with him to PIB meetings when he came over from Wales.
(he returned to S-Wales -Bridgend- after the war)
But after he died the album got lost when his belongings where cleared.

Hello Vincent, that's a shame but we won't hold it against you, its still a fascinating story.

Searching for more info on the PIB I found this film.
Is this film known to some of you ?
It has a few bits that show motorcycles during training at what I think to be Wrottesley Park.
A row of 16H's and a pressed steel frame BMW with sidecar http://in.beeldengeluid.nl/collectie/details/expressie/26387/false/true

Rob
Re: a few WD pictures

My first reaction Arrrrgghhhhhhhhhhhh when seeing that film.
The first ever clear picture of genuine wartime PI Nortons since starting my quest in 1995!!
Not even the regimental museum could help me!!

Thank you for giving this URL.

Oh wauw, I am very honored ! :relaxed:
I attach my -futile- attempt to make a screen shot of those Norton's and that pressed steel BMW wich could be single.
What is that emblem on the first Nortons tank? it does not look like the Dutch Lion used by the PIB. 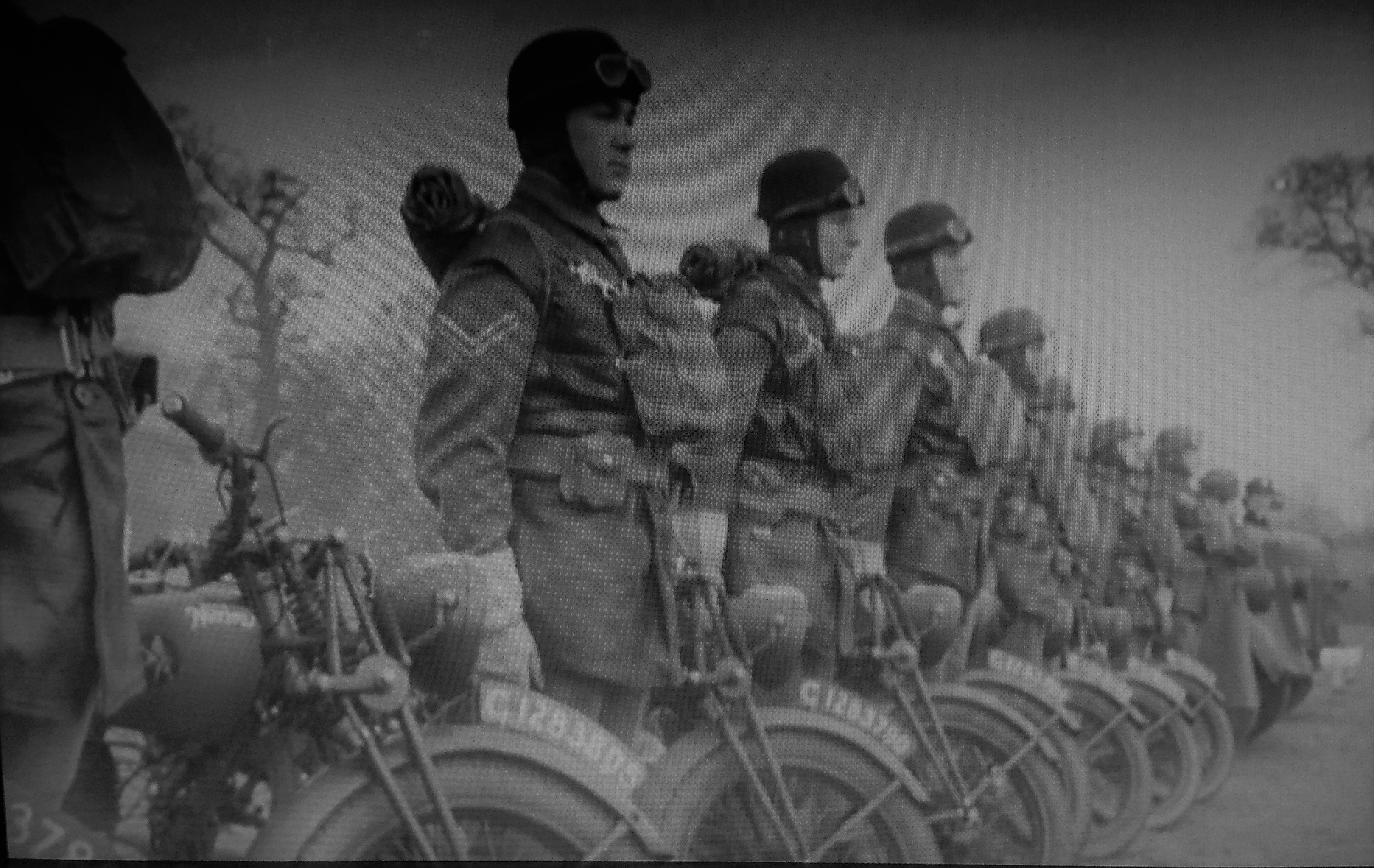 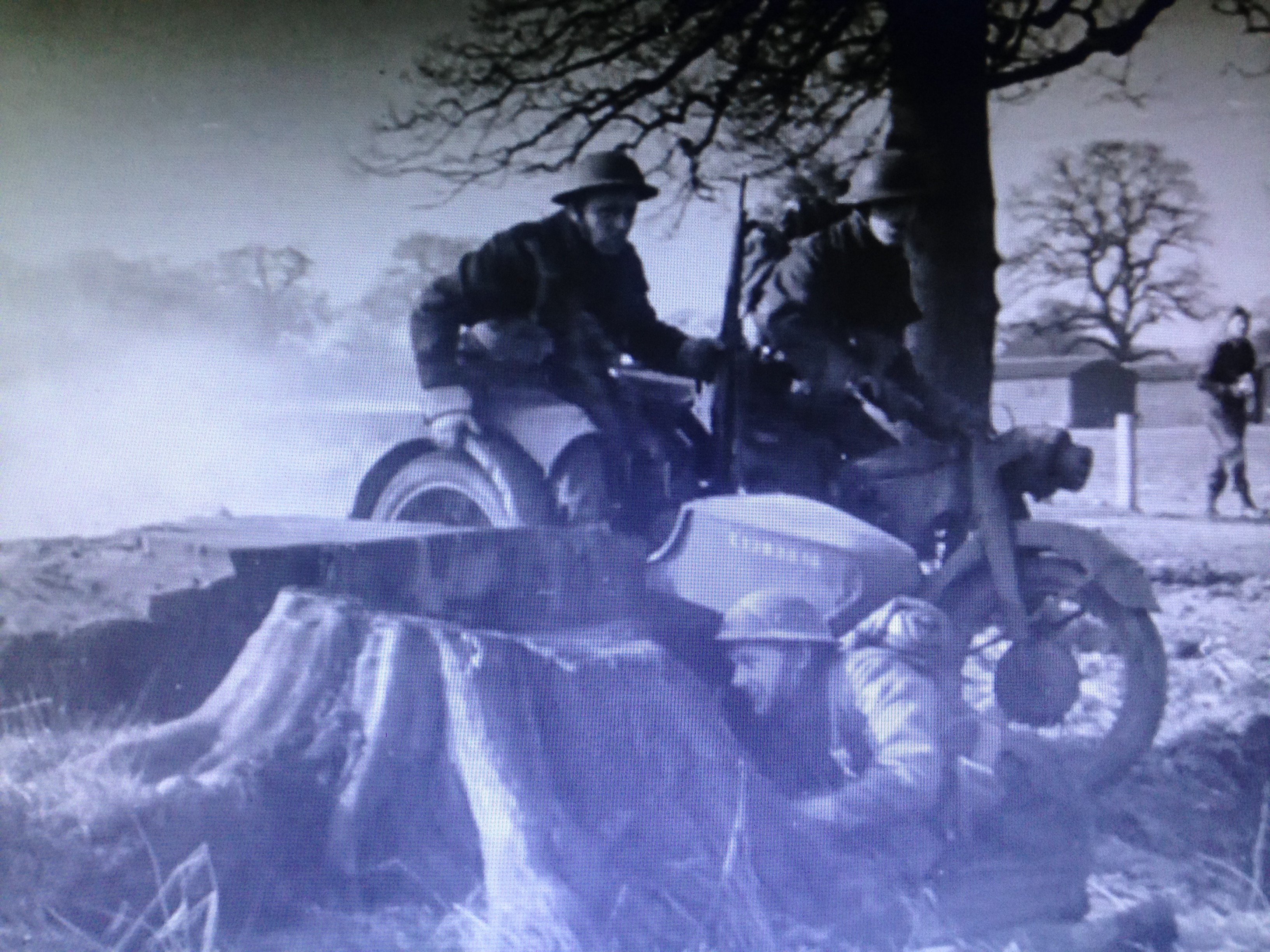 Rob
Re: a few WD pictures

It does look like the correct Dutch Lion to me.

The machines appear to be quite new in spite of the time this film was released (jan 1943).
Machines received in November and Dec 1940.

There are 8 machines but only 7 front number plates! 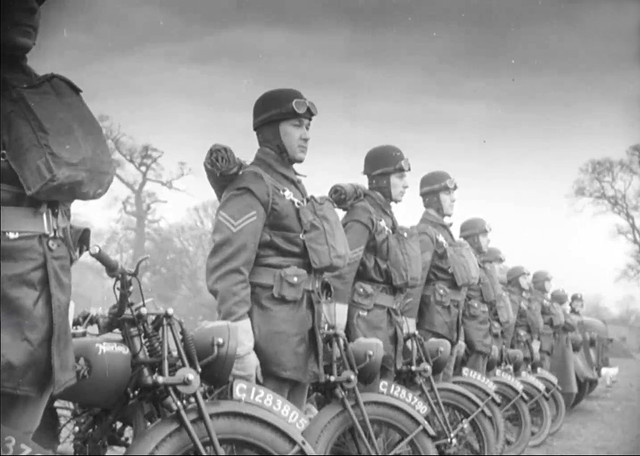 The actual film footage was made during the presentation of the new colours (het Vaandel) on August 27 1941.
Machines would have been in use less than one year, and probably cleaned up for the occasion.

3 more from the album of Jan van Ginneke

a couple of PIB BSA's and a PAG car.

Jan pillion, back in the Netherlands with a friend on a G3L.

Possibly also at Wrottesley Park, Jan van Ginneke doing a some off roading with a Harley + sidecar.