I was out for a ride a day ago and felt the clutch slipping a little. I took off the primary chain cover in what is likely the first time in multiple decades.

I'd like to remove/clean/inspect(replace?) the clutch plates. Before I get in too deep with my WM20, I always search this forum. I found there was useful thing called the WM20 BSA single spring clutch tool- which compresses the spring and allows the notched nut to be easily removed. Past threads show that Robb Nortier was producing one? Is this or a similar tool available?

I suppose I could jury-rig something myself, I've done it before, but I'd rather not reinvent the wheel. Or the Single Spring Clutch Tool.

I've still got some of Robb's tools for sale in UK. Unfortunately the clutch spring tools are all gone and Robb is not producing tools anymore. I made mine from an old Triumph piston some metric studding and a mate turned up the collar from a piece of ally. 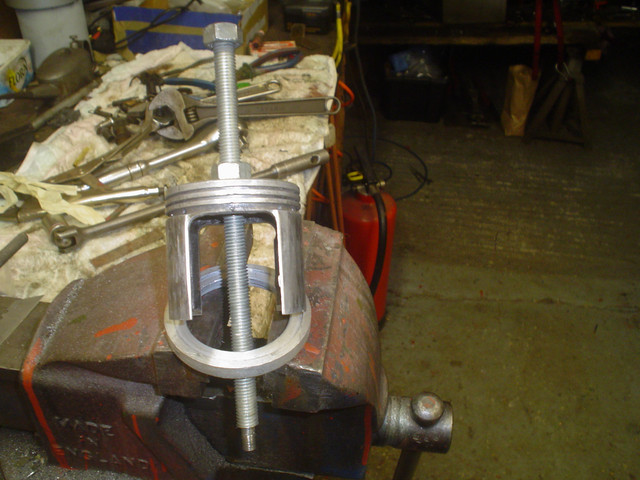 Robb's was a more simplified version in steel which I never had occasion to try out. 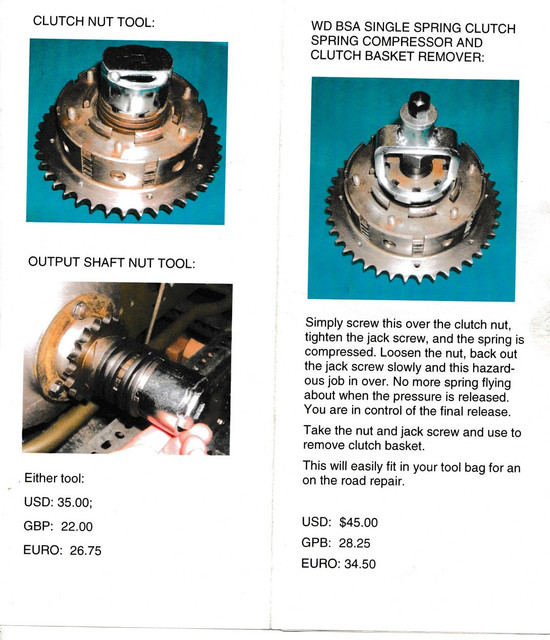 And I think there are some clutch strip techniques from dear old Hans on the technical page.

I read Hans' page in the technical data section. Much more helpful than the BSA Service manual. I understand he was a respected and cherished member of the community and he will be missed.

I do have a friend with a lathe and milling machine. With the virus lockdown, it may be a while before I'm allowed over to his shop. If you, Ron, or anyone have the specs still laying around and have some tips, I'll see about making my own. What's the thread on the bolt that goes inside the nut? I've also done 3D printing in stainless steel and while that might be fun to try I doubt it'd be cost effective.

Michiel! Aha, so you're Small Heath! I've already watched your video 10-20 times over the past few days. I should have known it came from someone here. Yes, it looks very easy and it's what totally convinced me I need such a tool.

The thread in the mainshaft nut is 5/16 x 26tpi BSCyc. Run a tap in the thread first as sometimes it can be burred from the pushrod. Ron

I have a bolt which fits. My measurements are 2.25" around the castle nut and 2.41" around the spring. Does that check out?

I did a quick 3D rendering just because. To print the whole thing in stainless is $70 US which seems excessive when in a machine shop it could be fabricated for a fraction of that. But with printing, I'll have it in a week and all I have to do is press a button. 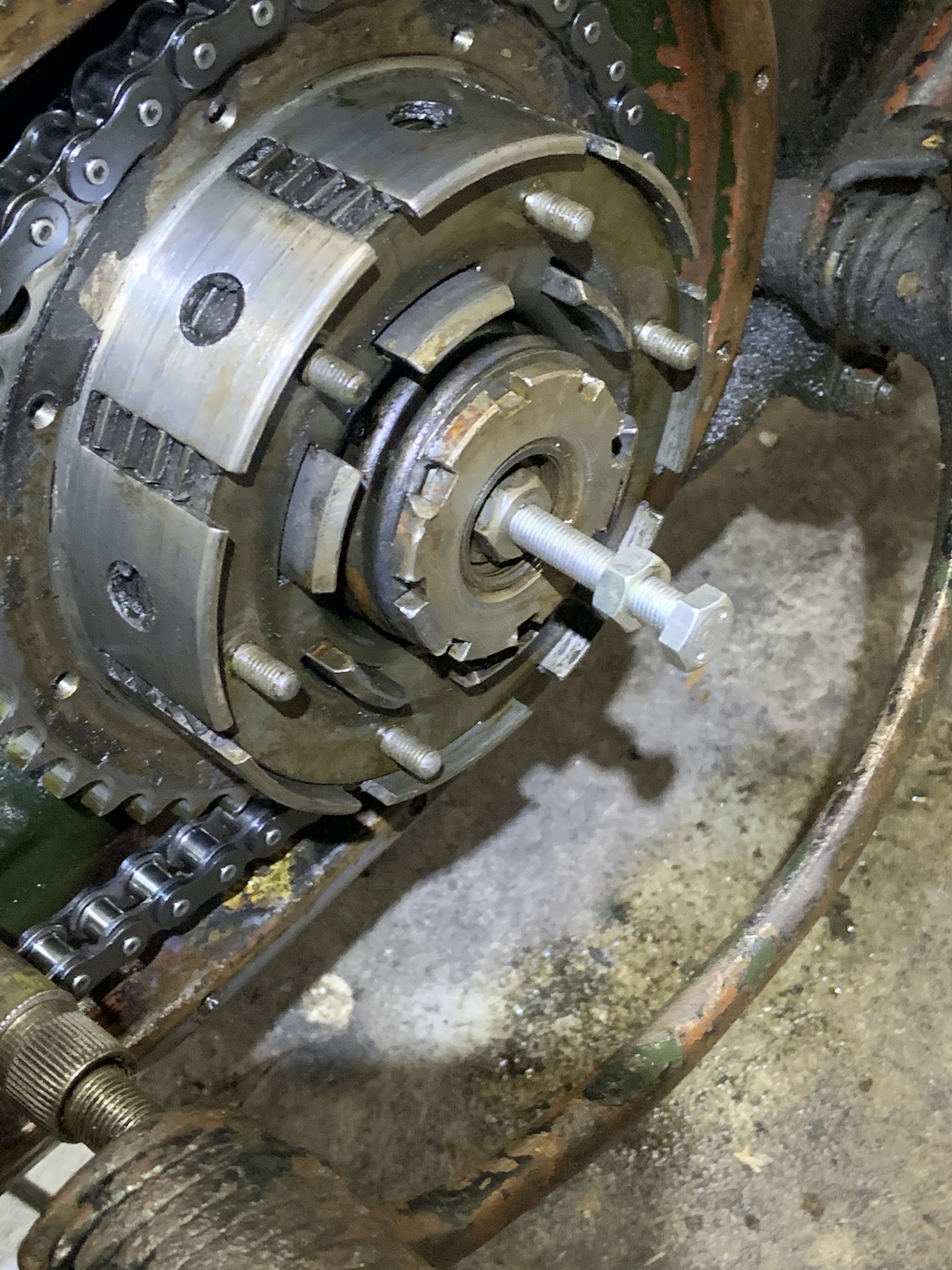 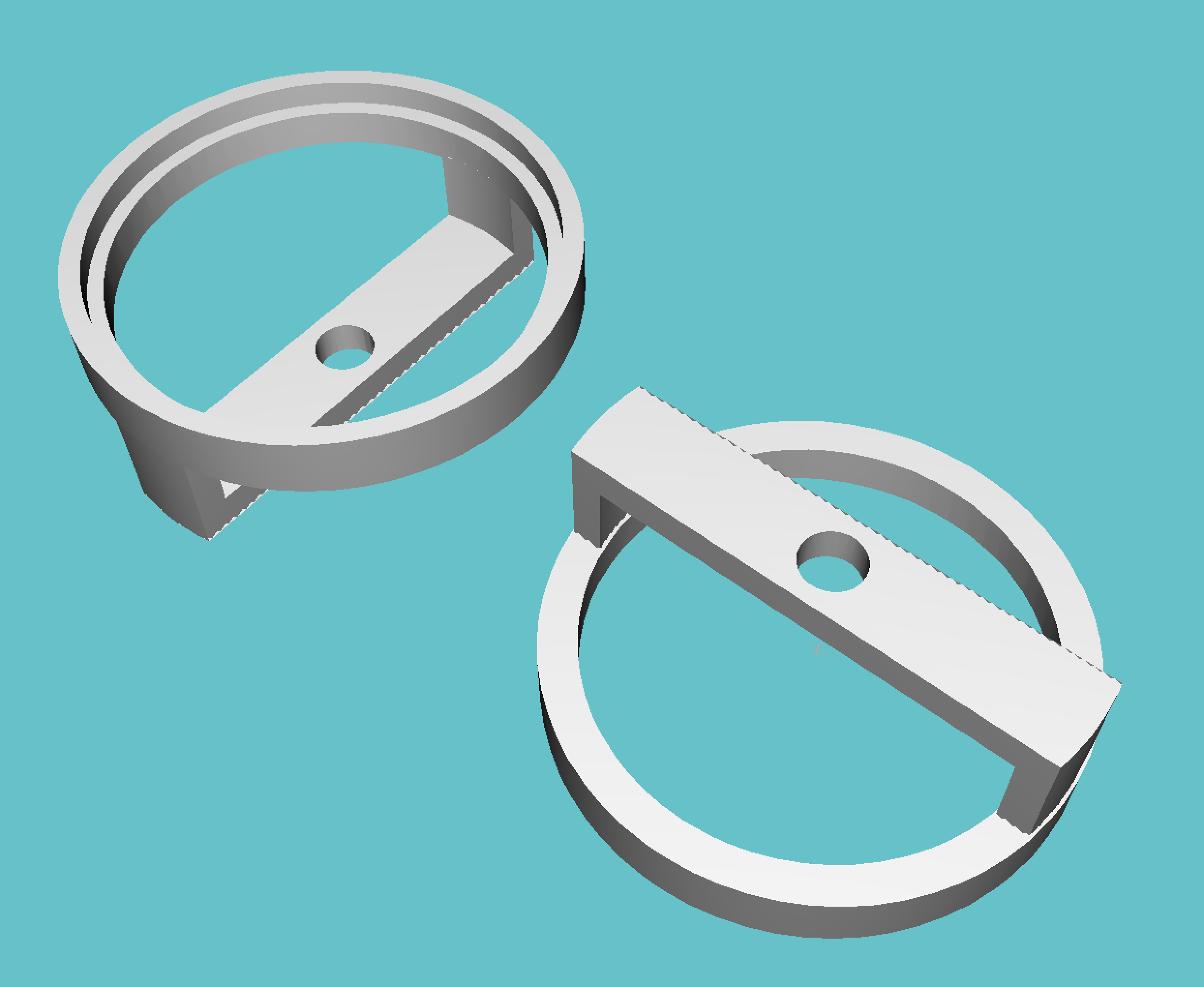 Solved. It's not anywhere as pretty as Michiel's or Ron's but it worked. Took an hour to make and cost nothing (the steel was scrap).

The two 'teeth' pushed back the spring enough to take off tension on the nut and the contraption simply spun with the nut as I undid the bolt and nut. We'll see how it goes back together. 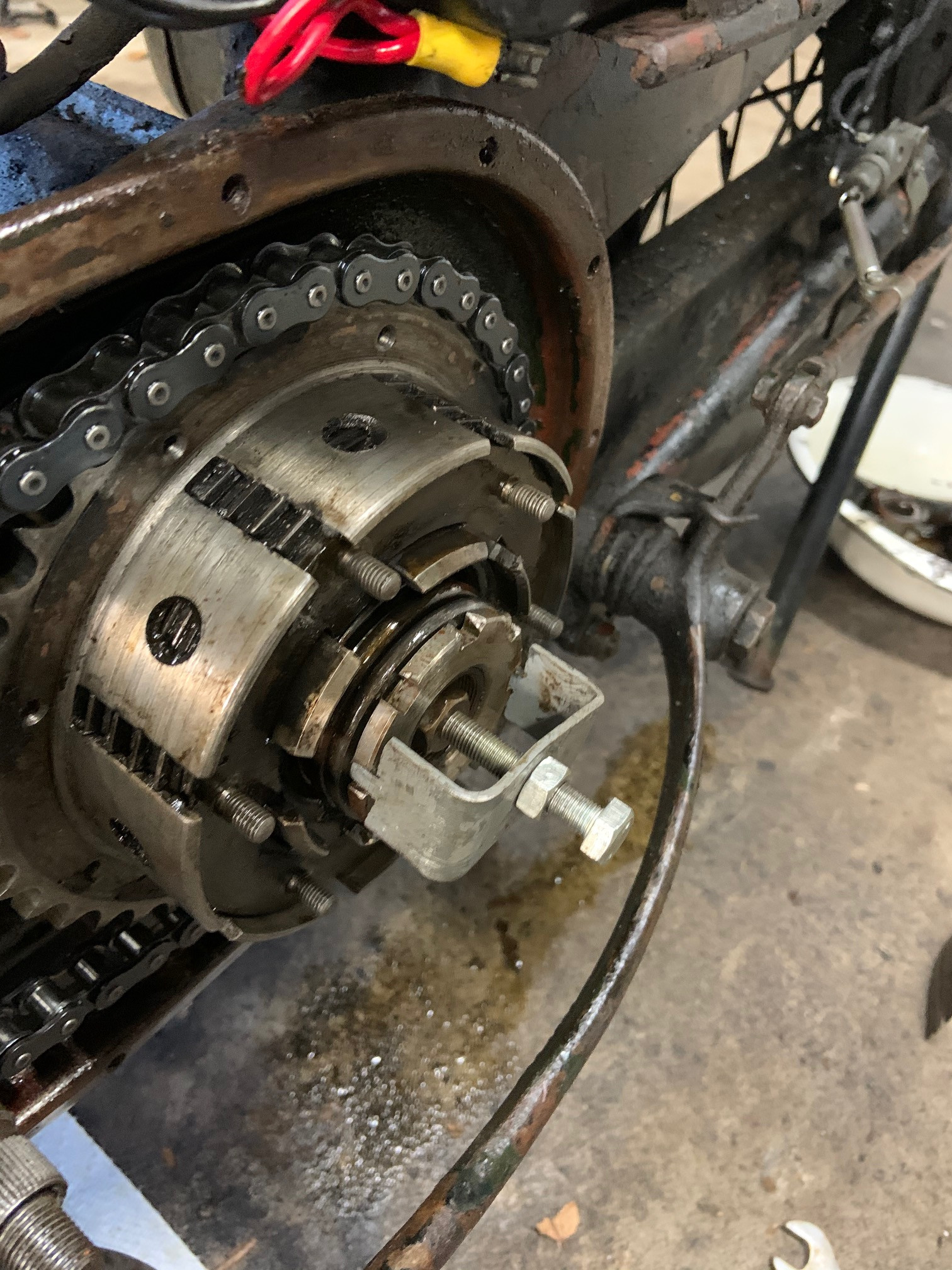 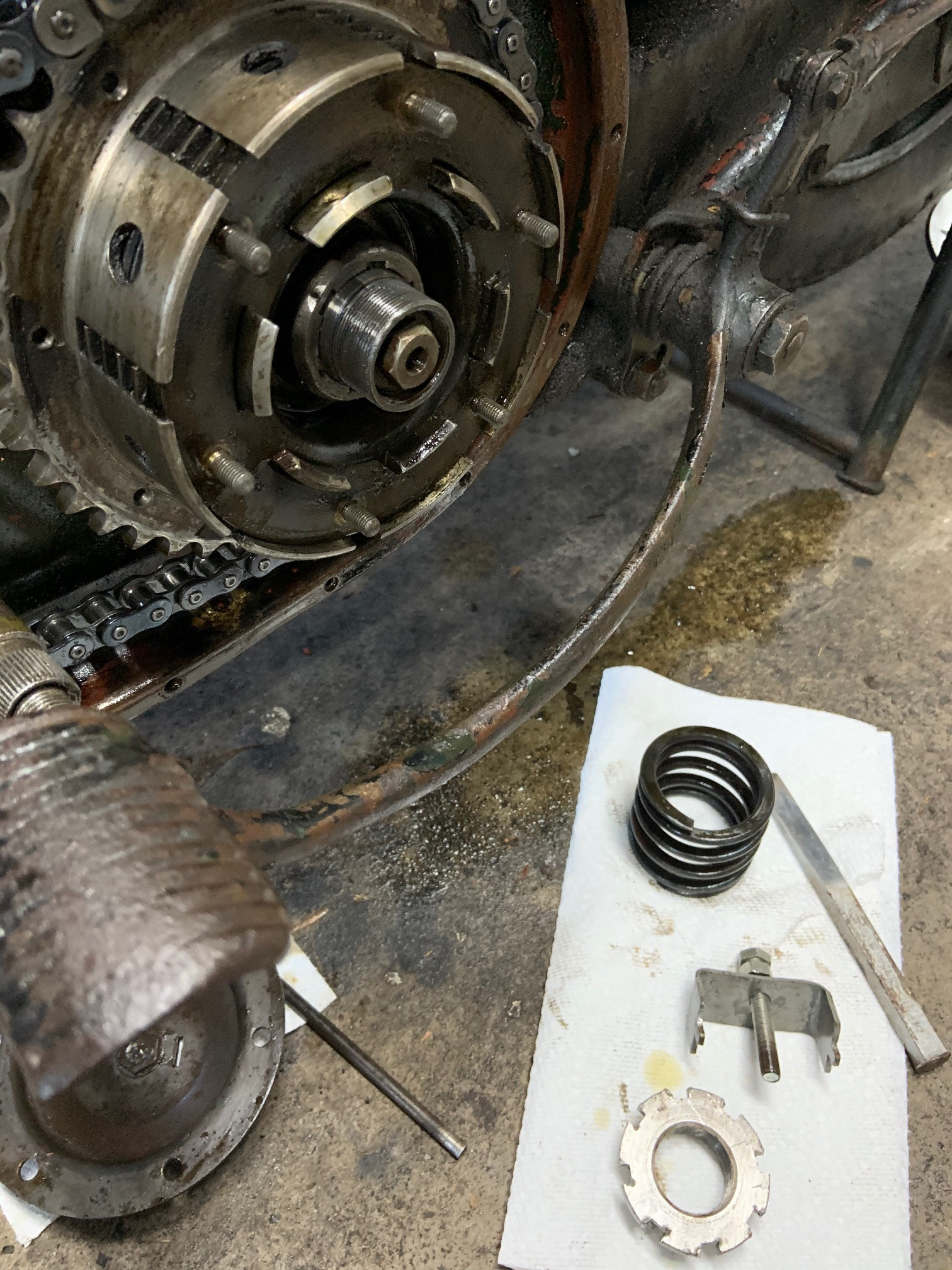 Hmmmm! Personally I think you will need to spin the nut freely to replace it....But as long as it works!:+1:

What size is the thread in your mainshaft nut? Looks bigger than 5/16 to me....Even Metric:scream:

The genuine tool does the same thing as the clutch nut & the tool are both 26 tpi so they move as a set.
This is missed by most users who try to compress the spring to give free movement of the nut to start the thread.
Does not work as well as Rob's tool but we can all build a better mouse trap .

The problem with the original tool is that if the thread into the nut is worn, the bolt is even slightly bent or the spring has an uneven, non square 'set' then the nut will not be square to the thread when it is pulled down...That makes it nearly impossible to engage the very fine thread, particularly as spring pressure comes into the equation as well....

I made the first tool to the current pattern after struggling to do two different M20 clutches over a couple of days, in fact I made mine originally from an old piston and some turned parts as well...

There is no doubt that allowing the clutch nut to 'float' transforms the job and makes it very easy compared to the original tool....Ian

Yep! Credit to Ian for the Piston tool as I made mine after borrowing his back in the olden days!
Here's mine in action...Works a treat:ok_hand: Ron 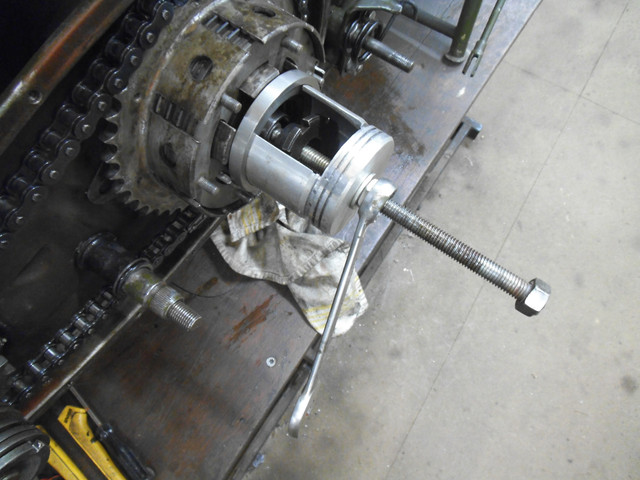 D Bakker
Re: WM20 Single Spring Clutch Tool?
Ron Pier
Hmmmm! Personally I think you will need to spin the nut freely to replace it....But as long as it works!:+1:

What size is the thread in your mainshaft nut? Looks bigger than 5/16 to me....Even Metric:scream:

Ron
Ron, it's 5/16 BSC. I went to my old Domi-Racer box, picked the one you suggested and it was correct. I'm sure you're right about spinning the nut. I expect it will be slow careful going making sure it's properly threaded.

It's an ugly as sin jury-rig and it's slow and awkward. When I have access to a lathe I'll make a ring. Who knows? Maybe my gasket set will take so long that'll I have that done before it arrives. Thanks to this forum, I understood the real trick would be taking the spring pressure off the nut and holding the spring in place once the nut was released. Cheers!

This original BSA tool would not be to hard to copy,with a piece of tube the same dia,and a flat piece off steel or bar for the lever. 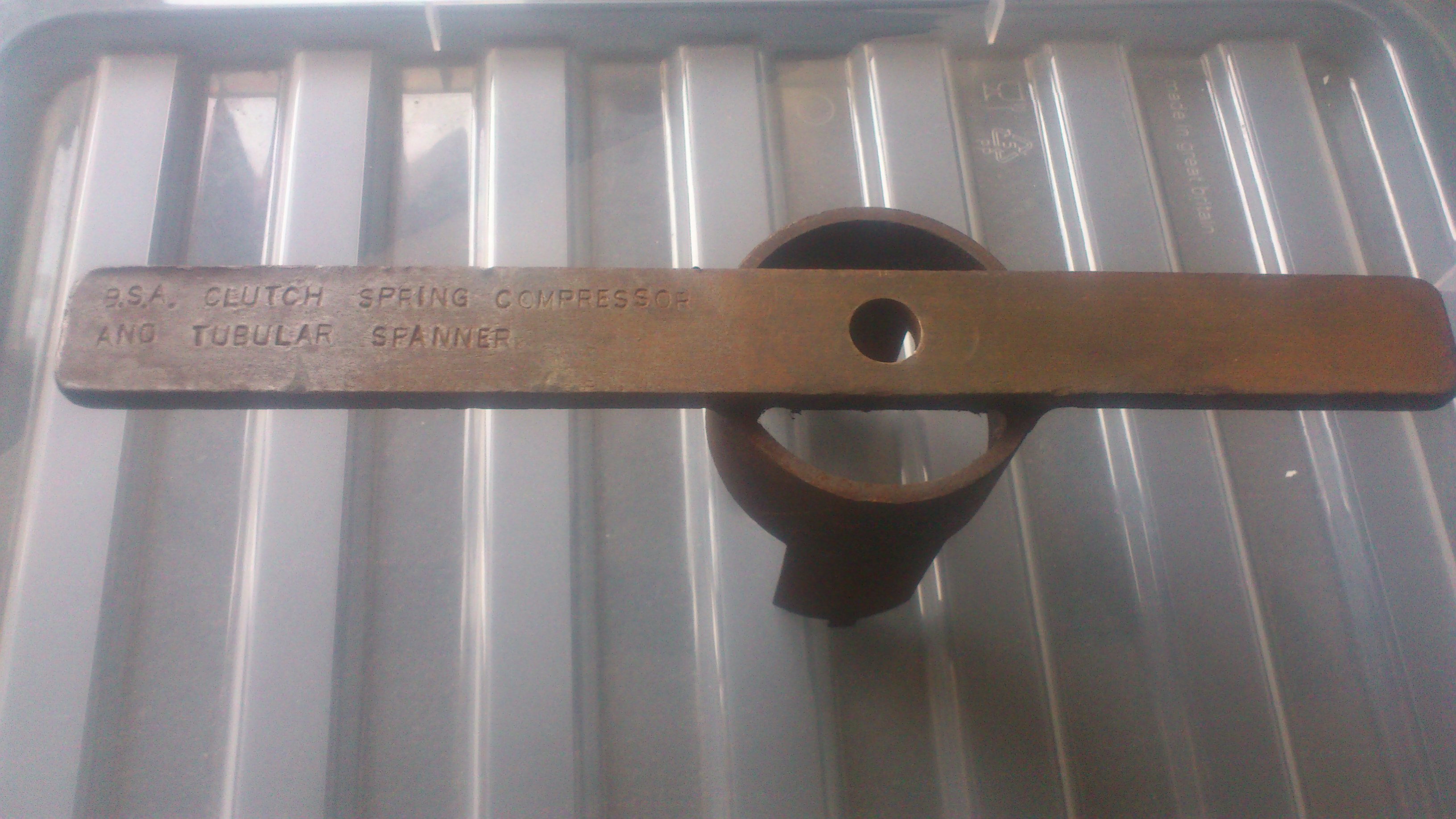 The 1946-58 list of BSA tools doesn't include this one, the more familiar clutch spring compressor tool is the one shown...

I've not seen this one before myself and wonder whether this is an aftermarket tool?...
BSA tools aren't usually marked with a description in this way, being identified by the part number and the illustration in the 'Service Tools' worksheet No.711....Ian

Yesterday I replaced the cleaned clutch plates with no issues. Piece of cake, really. My 5/16" bolt was a little bit shorter than ideal- I had to press the spring and nut in by hand to allow the long bolt to engage- but once that did I was able to hold the spring pressure away from the large nut enough to allow it to thread. It was surprisingly easy actually. As the large nut threaded down I simply had to periodically tighten the nut on the bolt a bit more to keep the spring pressure off.

It was made from a piece of soft steel strapping left over from a shelf unit. Bent on a vice and roughly shaped with a hacksaw. Very crude but it works. 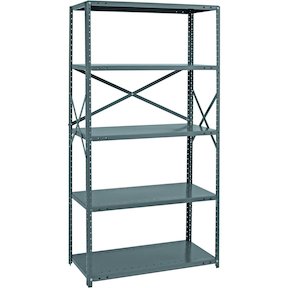