That was quickly done Ron!!! I'm still after a spraycan with a slighly more yellowish silver, had them before, but can't find them now.

Did you varnish over the (very thin) sticker? it is advised by the makers.

Btw, I did all the research on the colours of the cans, read back a page or so here.

Nice collection of Norton books Rik! I don't have that many, but have a lot of other makes too!

I've got some matt and satin spray lacquer, so will give it a coat today. As far as literature is concerned, I only strive for the manuals and parts lists for bikes that I might work on and I don't care if they're original or re-prints. Ron

I have the advantage, Lex that I focus on only one model and the early period of that as well !

Here is my attempt at Wesco 200 restoration. I bought the dullest looking silver that I could find but it was still far too bright. A dusting with satin lacquer has taken it back to a much more 1940s looking finish though. 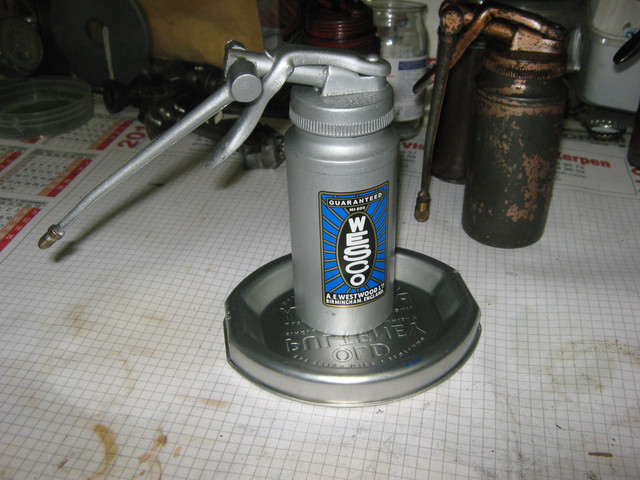 I used Simonize "wheel Silver" mainly because it's nice to use and I always have it in stock. Likewise I gave it a spray coat of petrol proof satin lacquer and it looks fine to me now. Ron

Henk Joore
Re: Rivet-Counting and Beyond...

Here a photo of my silver wesco. 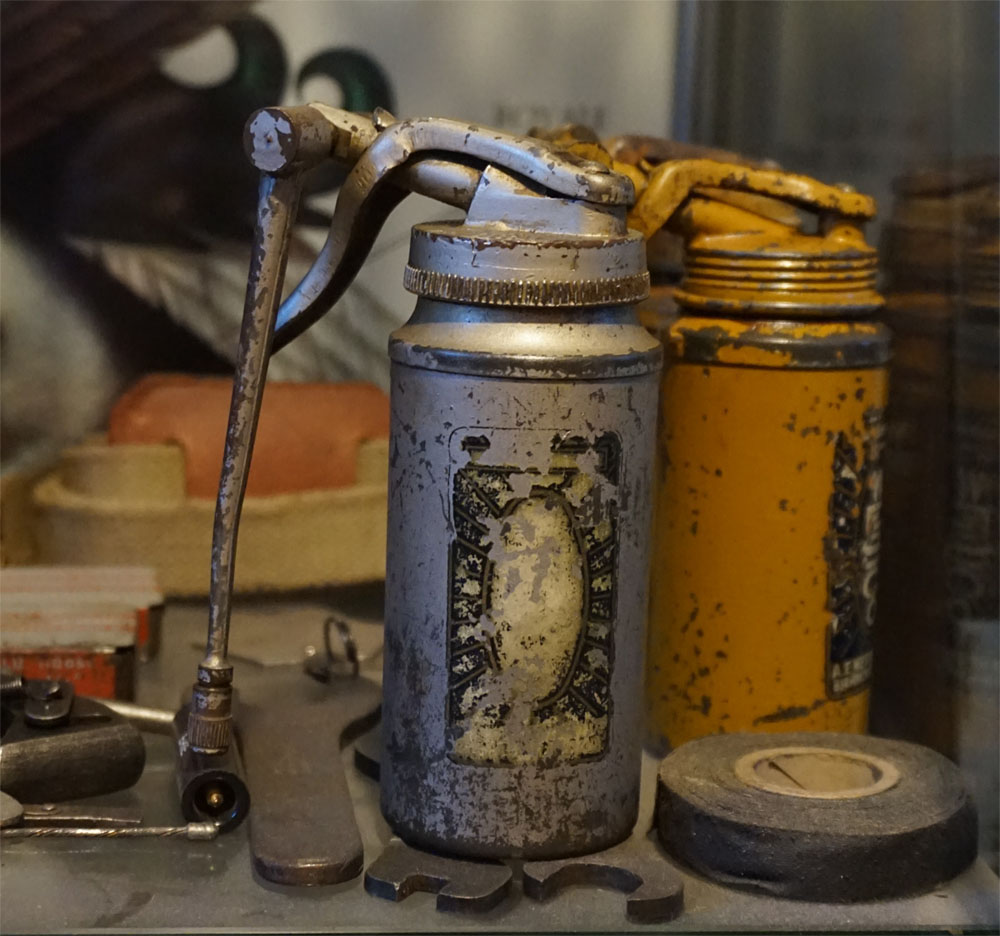 Rob Miller
Re: Rivet-Counting and Beyond...

I bought another "yellow" one as I was leaving Beaulieu this year because it had most of its original transfer and was in better condition that the two I already had, comparing my 3 they are all quite different yellows, I will post a picture later.

Silver coloured cans seem to be pretty rare, I don't think I have ever seen one other than the pictures posted by forum members?

Larger military vehicles seemed to be issued with the longer shaped 1/2 pint cans which you rarely see painted, I think they had a tinned rust proof coating so maybe the only reason Wesco cans were originally painted was to protect them from rust?

There is some reference to copper and grey coloured cans being used for special shock absorber oils and its possible that this became more common after the new range of oils was introduced but there doesn't seem to be a DME circular to recall all issued motorcycle cans for replacement or repainting?

Someone mentioned having a red painted can which according to the list of new oils would seem to be correct for 50.H.D used post 1943 in motorcycle tool kits but again there don't seem to be enough around for this to have been a standard policy?

Are the pictures shown of a can being used on a Norton definitely from the toolkit of the bike or could they be in a workshop?

I think we need more data before I start painting cans.

Lex Schmidt
Re: Rivet-Counting and Beyond...

Ok, well for me it's reasonably clear, two colours used, silver (painted as Henk's sample proves) and yellow, I have several different yellows too, from almost orange to the mustardy colour, but if you look on the bottom of some of the cans, this can be down to sunlight exposure and such.

The copper plated cans are not so much in abundance, and there is no pictorial evidence, so will disregard them for now, red folders I have never ever seen.

The Norton stills are from the training film, readily available on YouTube, here's the link, and see what you think, but I am sure it's from the toolbox of the Nortons.

I agree with Lex that the film which deals with the implementation of the 'Task System' appears to show all tasks being carried out using the contents of the machine's toolbox.

The 'bitsa' can which I restored seems to have an early pattern of reservoir with an extra seam and is clearly copper plated externally. It's bright on the inside though and like all Wesco bodies seems to be made of tin-plate. The folding cap which came with this can had vestiges of silver paint. Not the goldish colour of Henk's can either. 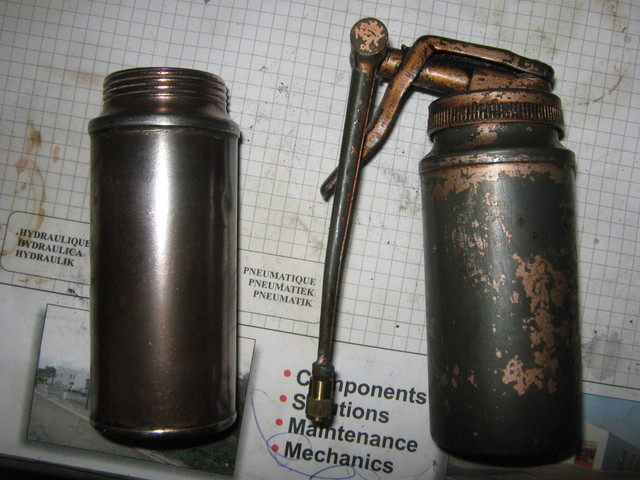 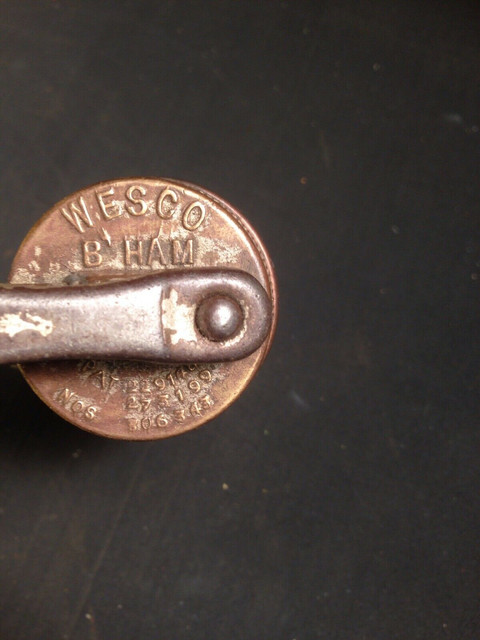 As well as possibly copper-plated cans, the most numerous colour on brass topped foldeing cans seems to be a dark gold / copper metallic shade...I've never seen a red folding can either.

Rob Miller
Re: Rivet-Counting and Beyond...

Do the blackout masks date the film, I seem to remember an article in a wartime magazine?

One of my yellow cans has the same set of patents as yours Rik, but some of the numerals on yours seem to be a bit more crooked, these really are quite a range of yellow shades. 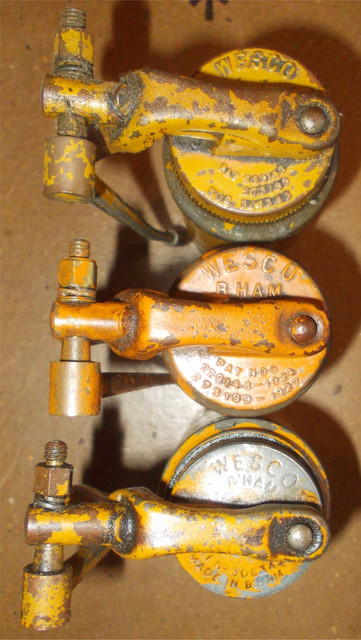 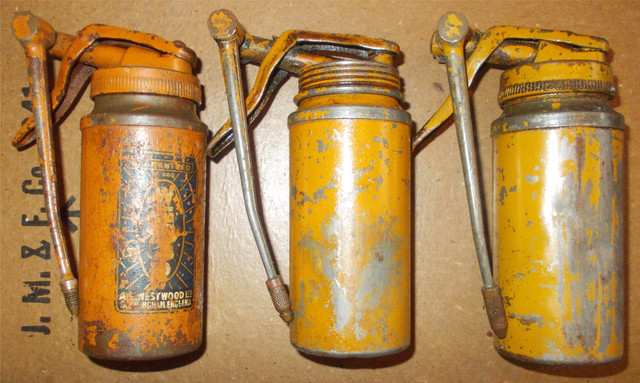 Steve Madden
Re: Rivet-Counting and Beyond...

I seem to recall that the "Army Motor Cycling" film was made in mid-1942 ??? I haven't watched it for ages but I think the production date is contained within the titles........

The black/white "schools" insignia was seemingly replaced by a similar red/white version at some point after 1942....and the hooded-type blackout masks and pillion-type rear carriers would date from post-1941........I'm also pretty certain that the 16H's shown in the film are finished in SCC No.2 brown........?

Interestingly, several of these 16H's appear to be earlier versions which seem to have been rebuilt/upgraded by workshops, hence the decent condition that they appear to be in for filming.........

Correct me if I'm wrong Steve. But I thought that the B&W square was for Infantry School and R&W was for Armoured school?? Ron

Horror
Re: Rivet-Counting and Beyond...

I thought I'd have a look at mine and the top looks like it was silver but the rest of it is a turquoise colour, so I guess it's been repainted but who knows. Just noticed what looks like a date of 1957 on the bottom. 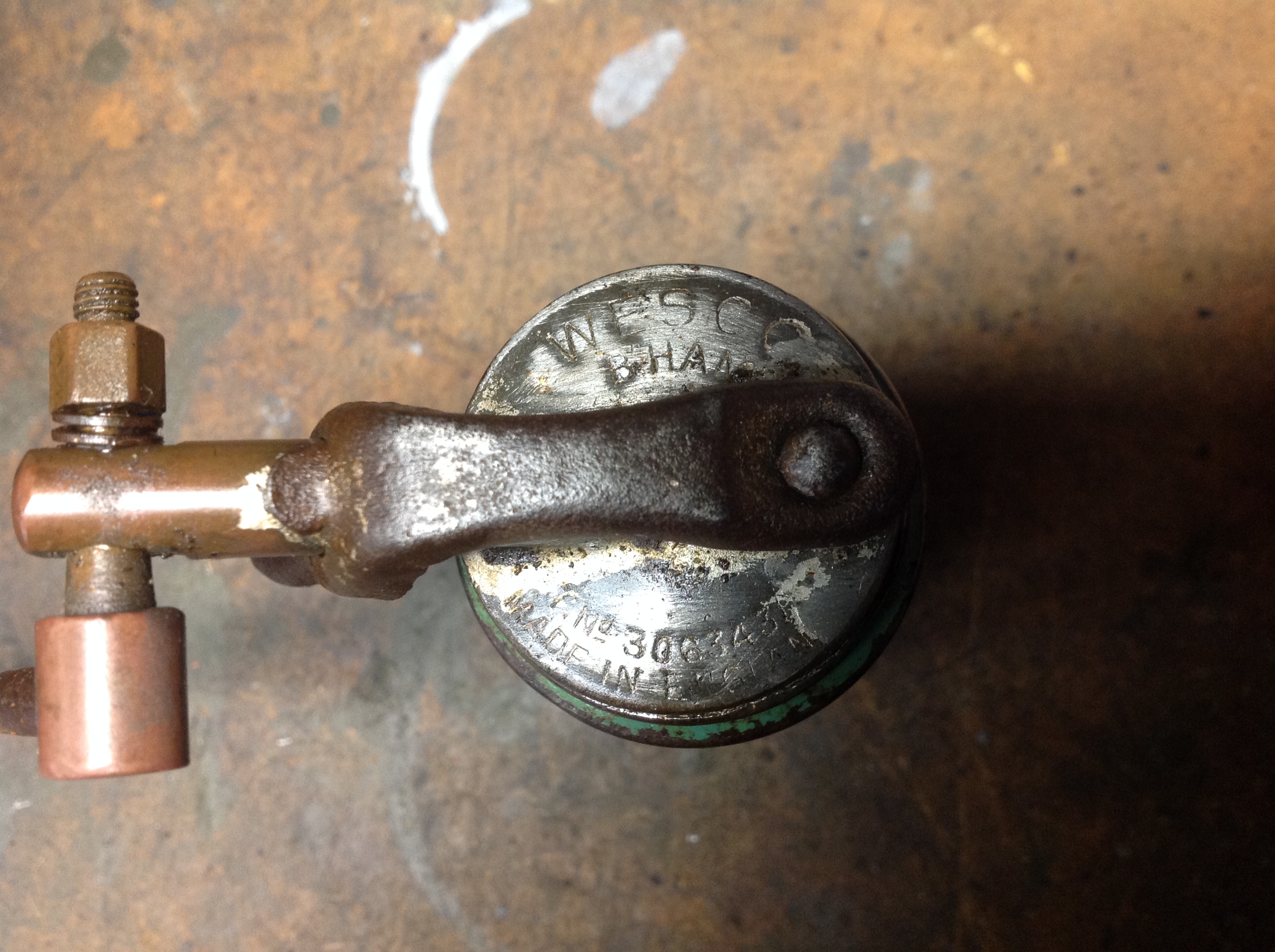 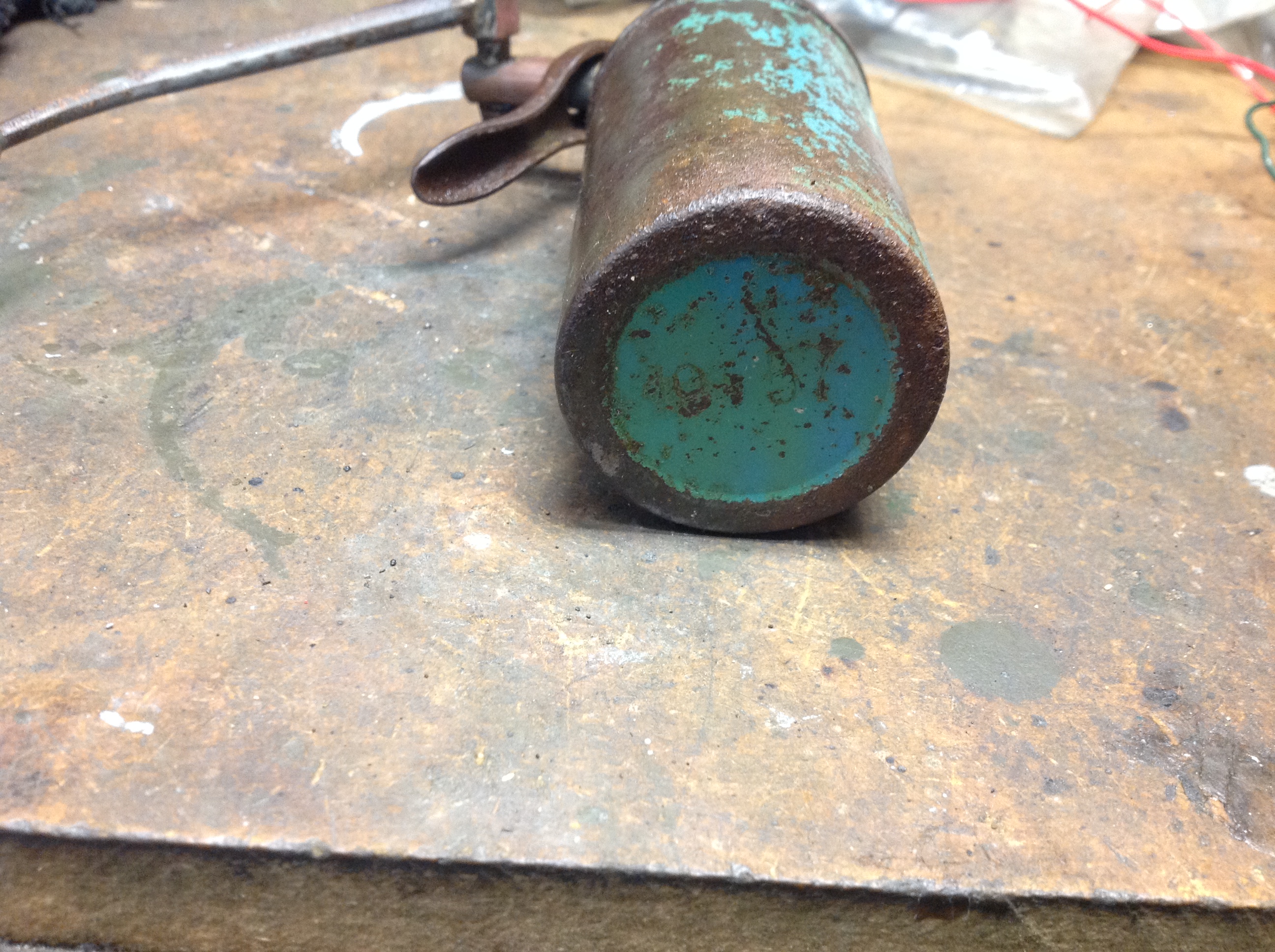 Steve Madden
Re: Rivet-Counting and Beyond...
Ron Pier
Correct me if I'm wrong Steve. But I thought that the B&W square was for Infantry School and R&W was for Armoured school?? Ron
Ron, according to Hodges and Taylor's excellent work, on Page 103 it states the following:-

"The signs for Schools and "Establishments", presumably including experimental and testing establishments, also carried an abbreviated title at the top of their standard shaped service flash, in black on a white bar. The remaining area of the sign was divided into four squares, the first and fourth of which were red and the second and third white in the case of Command Schools, black and white being used for War Office Schools. By the publication of Vehicle Marking 1943, all schools were to wear the red and white scheme"...............

In my mind, the presence of a red and white square would look very "Polish" at first glance....!
Ron Pier
Re: Rivet-Counting and Beyond...

Cheers Steve! I've done one in Black and White.:relaxed: Ron 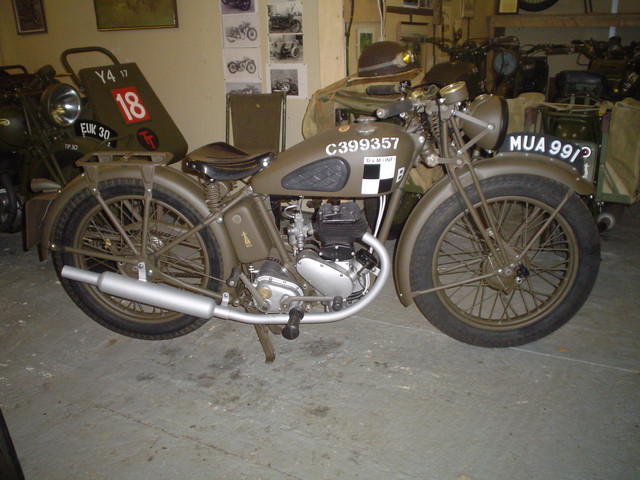 September 1942 seems to have been the date that red and white was first noted in ACIs. 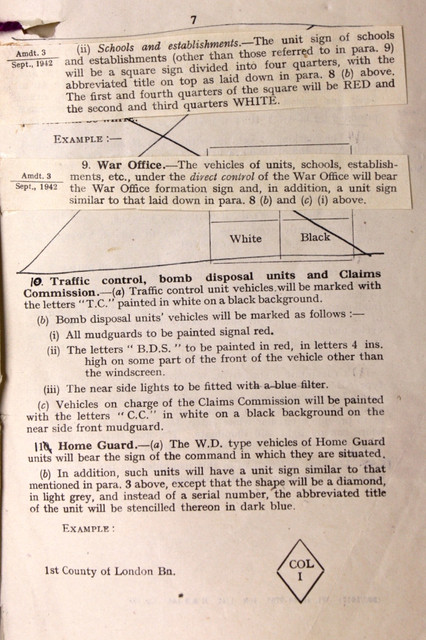 Unfortunately, I don't known what was behind the sticker.

Dave H. Post-war cans were generally dated - I've never seen the blue but many were made with specific oil company branding. I have a red Esso 1/2 pint Wesco. It's difficult to tell what has been swapped around in the intervening years, but any mechanism with all metal parts is probably OK. The can in the training film looks to have the rolled steel top.

Nathan Saunders
Re: Rivet-Counting and Beyond...

To be really pedantic, the rectangle containing the word "Guaranteed" shouldn't overlap the diagonal "beams" each side? :wink:

« back
Return to Website  > Index  > Start  > WD Motorcycle forum  > Re: Rivet-Counting and Beyond...
Nieuwe pagina 1