Picked up a WD M20 recently and was trying to ascertain the year of manufacture. Unfortunately, the spot where the number is stamped has been obscured by brazing at some point in its life, likely intentional as I see no need for a repair in that spot. Nevertheless, is there a way to determine the year based on some other feature of the frame?

There are a few differences in these frames, the most obvious is the saddle lug. Early bikes have a one piece saddle / rear tank bolt lug all made from sheet metal. Late(r) frames have this as two separate parts of which the saddle lug is casting or forging soldered on top of the frame tube.

Usually you can either X-Ray the frame or sometimes a mag partical inspection will reveal the numbers.

Can we date the change in the one and two part saddle lug Henk mentioned here?

I think that was done very early.
A picture would be very nice. 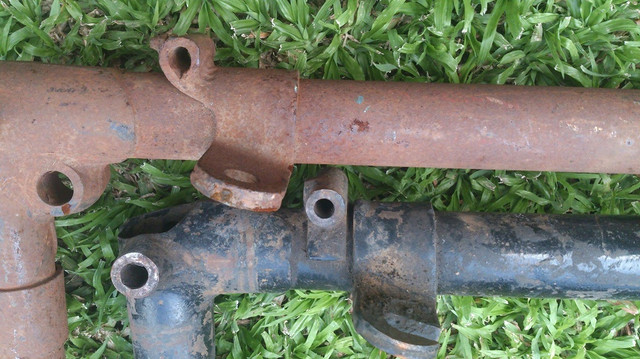 There are also differences in the front frame 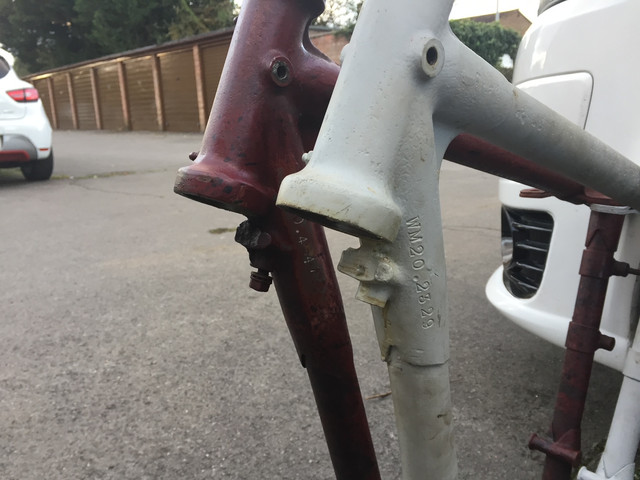 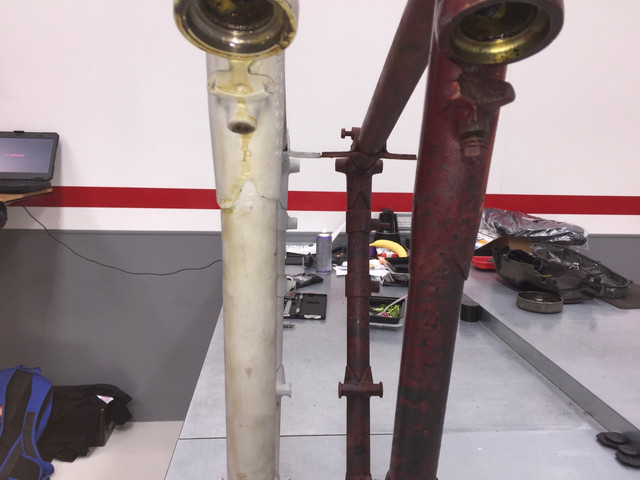 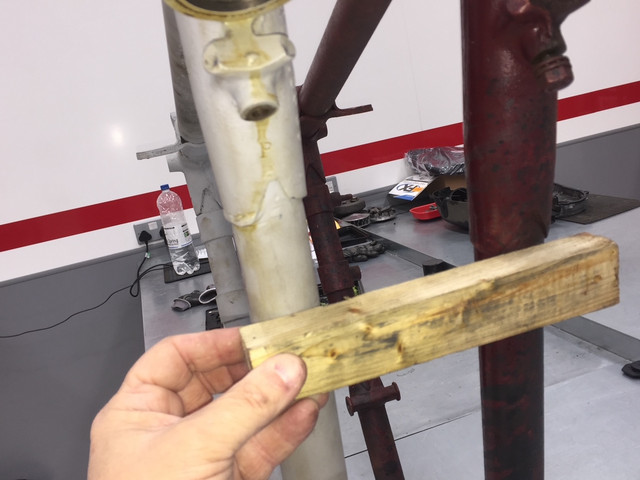 Can we narrow that down further, did the one piece bracket carry on into the WM20s?

My WDM20 frame number 26522, September 1940 has the one piece seat bracket. The headstock distance is 3 inches, don't know whether this helps!

That's great know we can check some early surviving machines to see if they have late war replacement frames with restamped numbers.

But lets keep going to see how close we can get to finding exactly when these changes happened.

Whilst on this topic

I weighed both frame fronts seen & the difference was approx 0.75kg

The earlier type being the lighter variant with different tubing

My Jan 1940 frame appears to have the shorter head stock. Ron

still on the frame,my frame has removable rear foot brackets ,a 2 piece bit,is this unusual or maybe earlier,cheers

Yes my 1940 frame with the early field stand lug also has no foot rest lugs attached. BSA supplied these bolt on type as an optional extra.
Ron 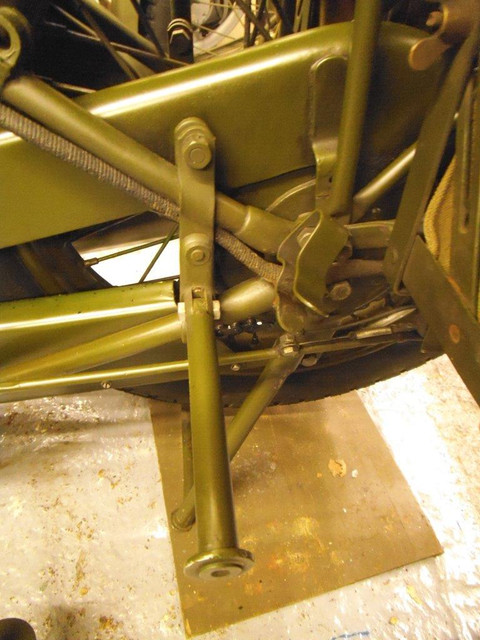 thanks ron ,great help for sure,cheers

I have had a look at my second M20 buried in the back of the garage and it has the later two part saddle bracket, this machine is interesting because its a GPO postal delivery sidecar lugged frame with the frame number WM20 13142, one of a batch of 50, this one being delivered 5/10/42 from the factory, but appearing to have a low 1940 period frame number, I had been assuming that this batch of frames had been prepared in 1940 but not completed as the British Army had needed to replace losses after Dunkirk, but this lug may indicate that the frame was made in 1942 along with the rest of the machine and then retrospectively given an earlier number, fascinating.

yes mine has the saddle type brackets,dont have any stands for mine,looking for a small side stand to bolt on for the time being,must be some out there somewhere

Just read with interest the differences in frame design details throughout the years and the variations implemented by BSA and the W.D.... (also I'm continually amazed with the wealth of knowledge betwixt you chaps! Thankyou🙏)..... the pillion footrests on my machine have been poorly welded to the frame and actually wobble about!!!.. it was a problem I was going to adress when I rebuild the complete machine at some point....after reading this thread though I'm thinking that the " clamp on " pillion rests may be what should be on my Nov.1940 contract bike???...what do you think gents??? if this is the case I may be in the market for a set of the aforementioned??....

Shaun that is very probably the case. This picture is of a bike from the large (17,000) contract C7287 which was demanded mid 1940 but not completed till Aug 41. If you were to restore your bike to ex factory spec, you won't need the pillion rests.

My own bike is from an earlier contract in 1940 but by the time of it's demob from Malta in the 60's, it had lost a lot of those early features. So I've depicted mine as a bike brought up to a later war spec, with a sprinkle of early parts....The panniers are soooo handy for even short tours. Ron 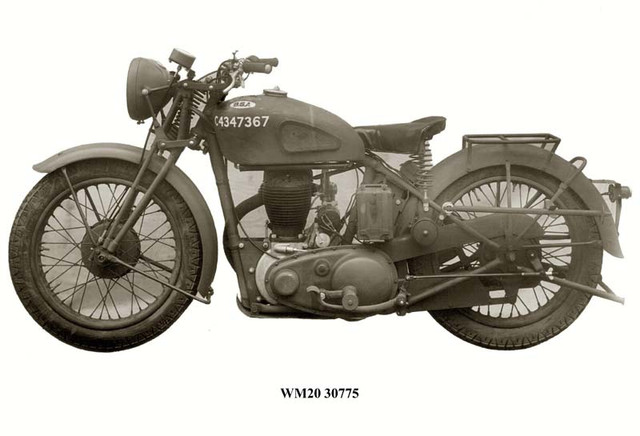 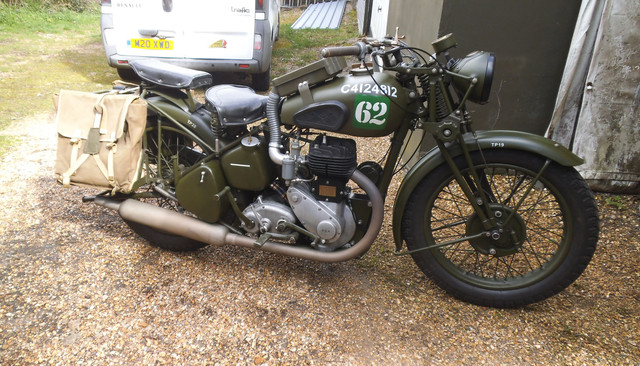 Thanks very much for the information Ron and the photo's....your bike looks absolutely top notch of course!!👍..I'm going a similar way to your good self and have a " practical" mix of parts but keep the overall integrity of the machines date!.....I'll definately get rid of the footrests I have now and put the feelers out for a set of " clamp on's" as I do want a pillion seat option if the occasion arises??... and ,as you say,the panniers are rather handy to have!! ..I've relieved mr O'brien of many magical items over the last year or so to retain the "earlier contracts " general appearance!?...thanks very much again..all info gratefully received sir!.pip pip ..Shaun...

Has he been asking for special favours for parts again ? :joy:

🤣🤣..thanks for pointing that out rik !! Sorry john for letting out "our secret" 😉